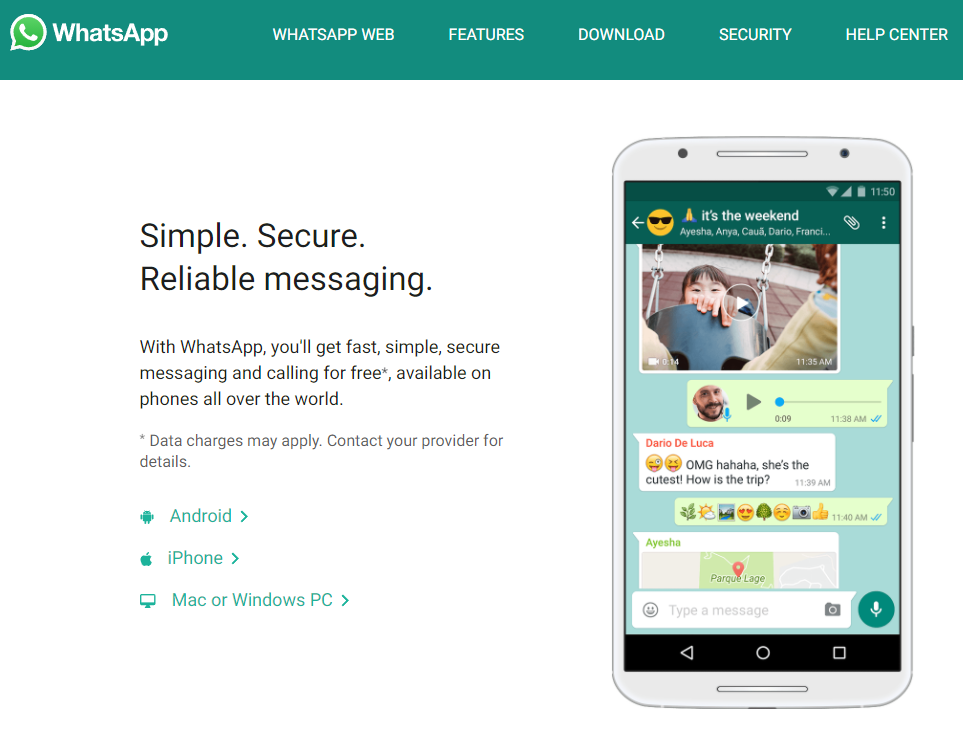 If you’re here on PinpointVPN, then it’s likely that you’re at least somewhat concerned about internet privacy. However, using a VPN like ExpressVPN or NordVPN will only get you so far when it comes to keeping things private. You also have to be wary of the services that you use on the internet.

One of the apps that you need to keep an eye out for is WhatsApp. In light of recent developments, one of the world’s most popular encrypted messaging apps may not be as secure as its users have assumed. In today’s guide, we’re going to look at some of the best alternatives to WhatsApp. 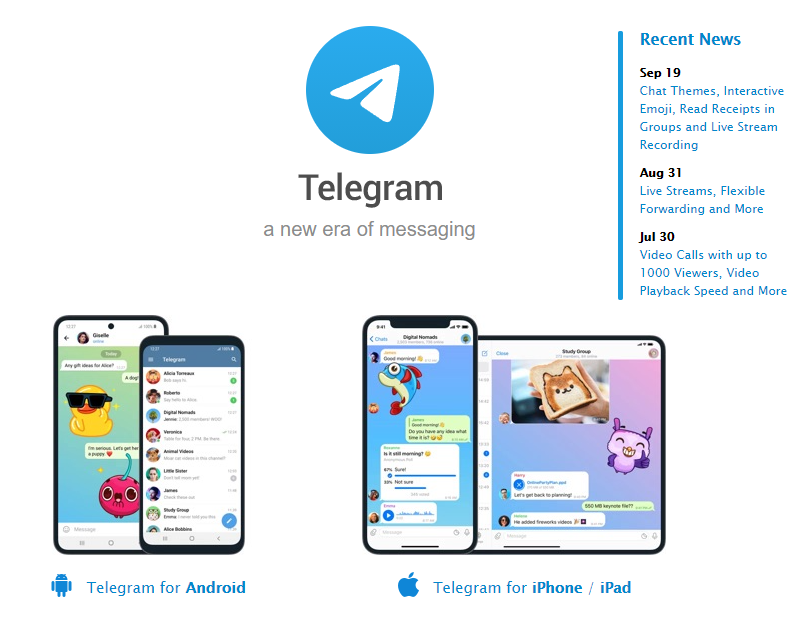 Telegram has long been considered an alternative to WhatsApp because of how similar the two apps are to each other. While other encrypted messaging apps may not have a phone number linked to them, this is one of the main points of similarity between Telegram and WhatsApp.

This will make it easier for people to get in touch with you if you already have them as a contact but it also raises some potential privacy concerns. Having your phone number linked to your Telegram account makes it easier to identify you, which is kind of counterintuitive when you’re looking for a method of communication that respects your privacy.

However, Telegram is a refined piece of communication software that is designed to be as easy as possible for its users to get used to. If you’re not the most tech-savvy user, you’ll likely appreciate Telegram’s approach to user-friendliness when compared to other apps that seek to respect your privacy.

Some of the more impressive and unique features you’ll find when you use Telegram include the ability to directly share files, a max group size of up to 200,000 (!) users. You can even send self-destructing messages so that you can feel a little more like James Bond when you communicate with friends and colleagues! 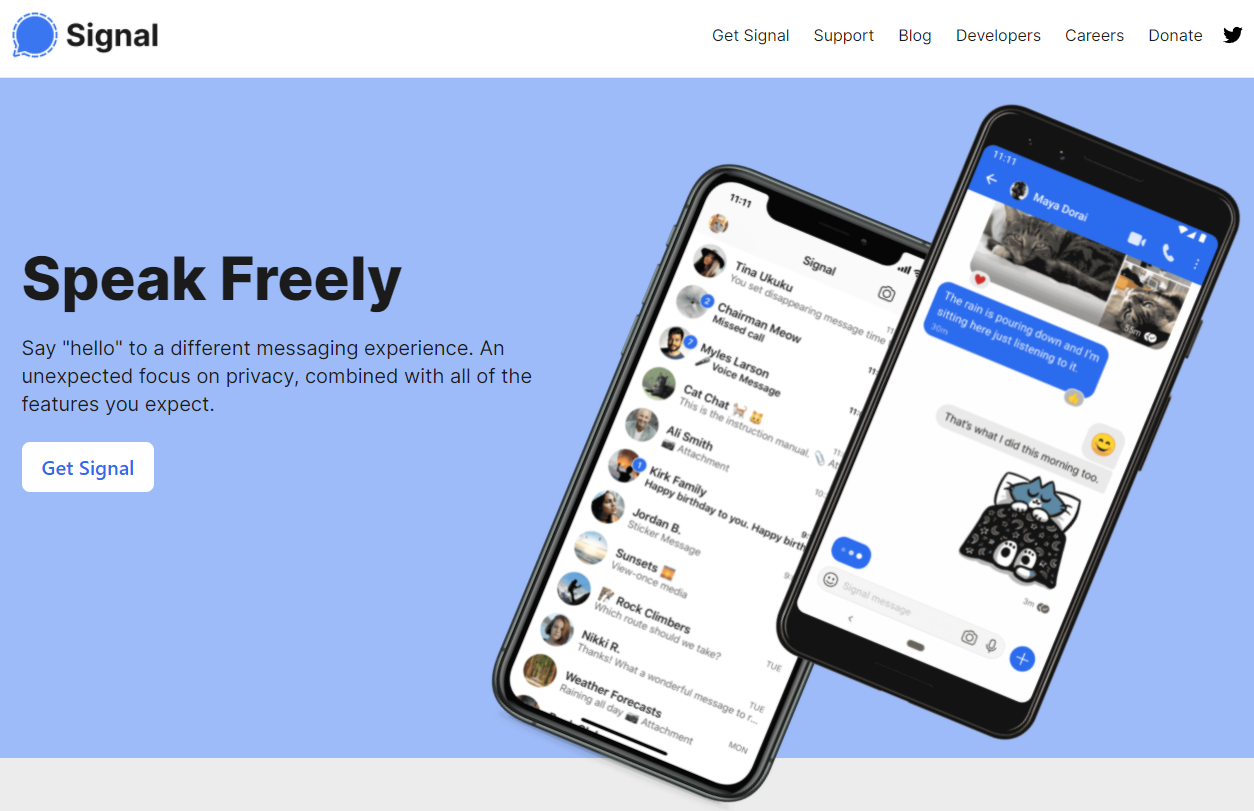 Signal is another encrypted communication app that you can use instead of WhatsApp, and despite its similar name to Telegram, there are a few key differences between them. Signal has repeatedly been described as one of the most trustworthy and secure messaging apps in existence, even being endorsed by Elon Musk.

Signal is the best option available if you’re sending messages that include truly sensitive information like medical records or key financial info for your business. However, despite this app’s insistence on confidentiality, the developers have still managed to fit in a range of extra features.

For example, you can send both voice and text messages through signal, and it even supports group calls and video calls. Like with Telegram, you can still send secret agent-like temporary messages that will delete themselves after a preset time has elapsed. While Signal uses the same encryption as WhatsApp, it doesn’t have Facebook snooping over its shoulder.

Much like Telegram, Signal was designed to be as easy to use as possible, so you won’t have any issues making the most of it, even if you’re not quite used to overly complex apps. One of the best things about Signal is that it’s entirely free so you won’t have to worry about paying for your privacy. 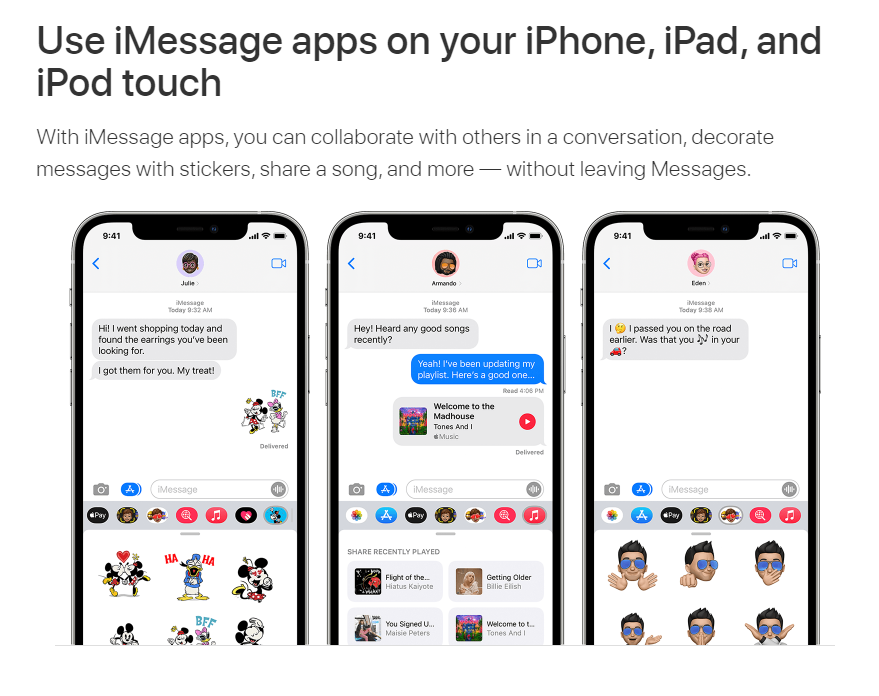 Apple has created a reputation for itself by supporting its users’ privacy regardless of the amount of pressure that is put on it. You’ve likely heard of countless stories of Apple refusing to unlock phones and data belonging to their customers even in the face of harsh demands from governments and their subordinate agencies.

If you’re worried about privacy, that means that iMessage should be a great alternative to WhatsApp, especially when you consider Apple’s encryption is some of the best in the industry. One of the best things about iMessage is that it combines its own proprietary messaging with standard SMS messaging.

Aside from its excellence as a messaging platform, iMessage has a few issues that should be ironed out over time. One thing that leaves users scratching their heads is Apple splitting up iMessage and Facetime. The vast majority of other messaging apps combine their calling features with their messaging.

You may have heard that Switzerland is a haven for internet privacy, and that’s due to the country’s strong stance on users’ privacy as emphasized in their laws. Along with a host of secure email providers, Switzerland is also home to Wire, one of the best WhatsApp alternatives out there.

Wire contains many of the same features that WhatsApp does, and they allow you to send voice and text messages while retaining the ability to video and voice call your acquaintances. You can also send gifs for those more lighthearted conversations while ensuring that the contents of your conversations will be kept safe.

One of our favorite things about Wire is that it allows you to sync your conversations so you won’t need to keep your phone on you at all times to access your chats. This is one of the main complaints that people have about WhatsApp, which makes it pretty inconvenient to access your chats on more than one device.

While Wire uses its own encryption protocol, it’s still open source and it’s mainly based on the same one that WhatsApp and Signal use. Even though this app is free for personal use, they offer a professional version with expanded functionality that’s designed to be used by businesses. 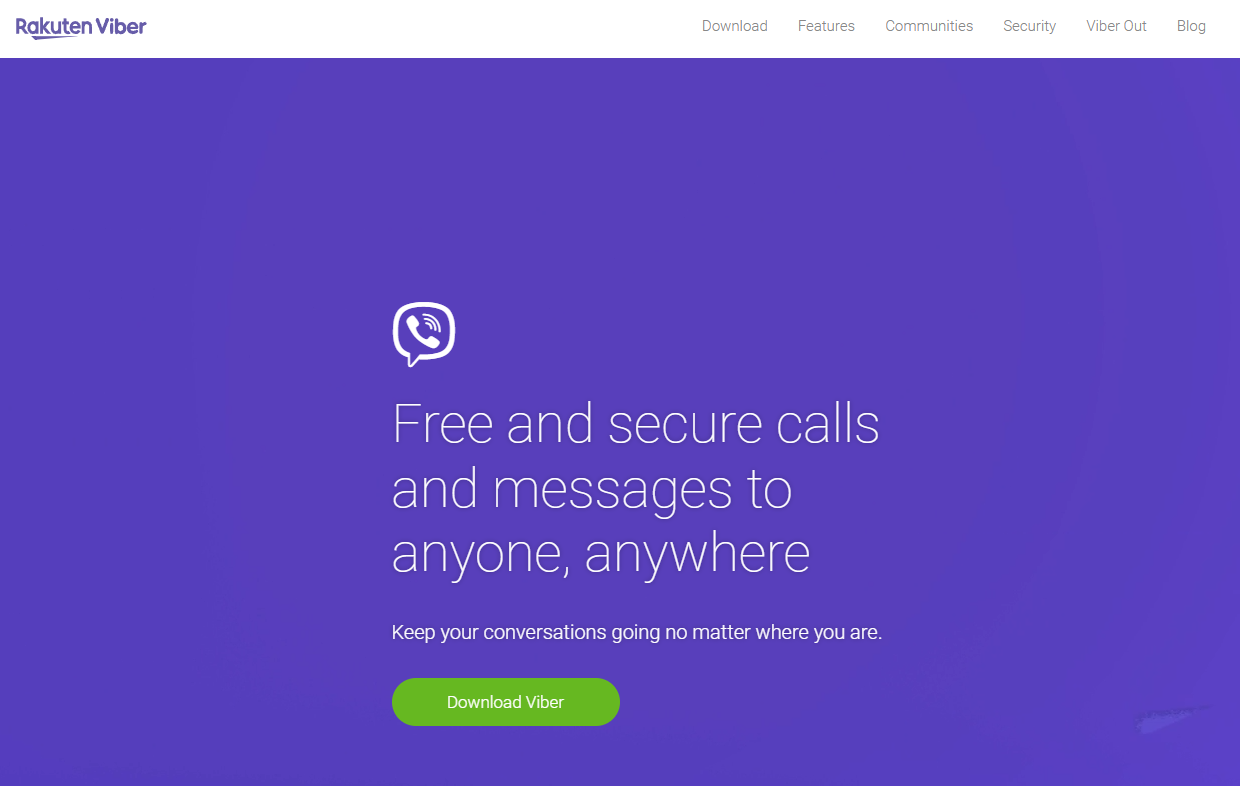 Viber is a Japanese messaging app that originally started off with humble beginnings but has since grown into one of the largest messaging apps in the world. Just like WhatsApp, Viber queries you for your phone number and it ties it into your account, which may be a concern.

Having your phone number linked to your account makes you a lot easier to identify, but thanks to Viber’s encryption, you likely won’t have to worry about data breaches. Viber is known for having a wide range of additional features that you won’t find in more professionally oriented encrypted messaging apps.

For example, Viber features selfie lenses that you can apply to your camera so that you can send filtered photos to your friends. Viber even features something of a social network of its own known as Communities. These Communities allow you to get in touch with people who share similar interests.

Another great thing about Viber is that it’s synced across desktop and mobile devices so you won’t have any trouble accessing your messages no matter where you are. On the matter of pricing, Viber is free but they offer a premium version that allows you to make international calls to phones without Viber. 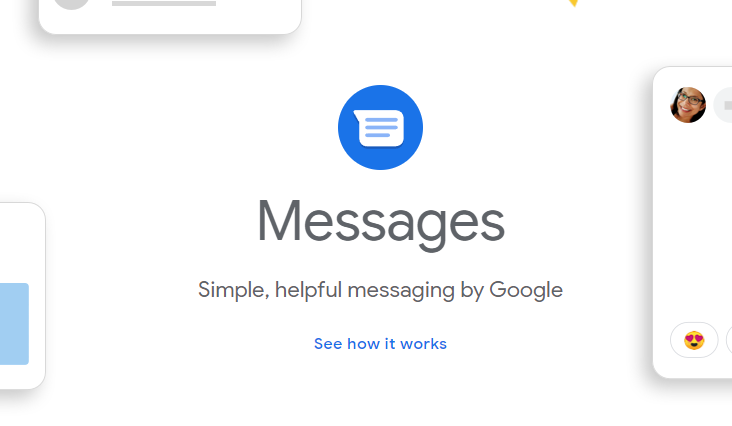 Google Messages is a new messenger released by Google, as the name suggests. For the longest time, Androids have had proprietary messaging systems based on the companies that manufacture the phones. With the release of Google Messages, Google is seeking to change this.

The app comes pre-installed on newer Android devices, but you can also download it on older hardware. Essentially, Google Messages is like the Android version of iMessage, and it shares many of the same features. This includes encrypted messaging that will keep your correspondence as safe as it would be with WhatsApp, if not safer.

One of the more interesting choices that Google has made when it comes to Messages is that they’ve followed in Apple’s footsteps by keeping their calling and messaging apps separately. Just like you need to use Facetime to call people on Apple hardware, you’ll need to use Google Duo to do so here.

There are a few weaknesses inherent in Google Messages, much like iMessage, its fiercest competitor. The main issue is that you can’t use the app on Apple devices, so you’ll need to stick to the Android and Windows ecosystems if you’re going to rely on this app for your communication needs. 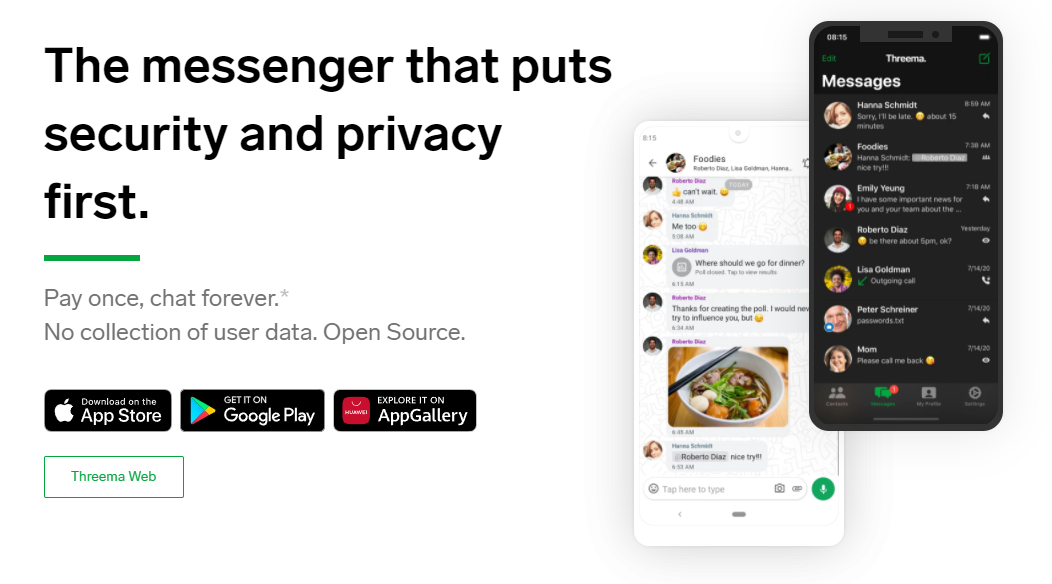 Threema is one of the more private options on this list because they do not insist on you providing them with your information. While you can still input your phone number to make yourself easier to find, you can also withhold it so that your communication remains difficult to trace back to you.

Just like WhatsApp, you can send encrypted messages. The app supports text messages, voice messages, and picture/video messages. An impressive feature is that Threema even comes with a built-in secure browser so you won’t have to worry about anyone snooping on your browsing activity.

There is one major issue with Threema: it’s not free. The app costs three dollars, and while that may not be that much in the grand scheme of things, it’s hard to convince people to pay for it when they have a dearth of free options to choose from.