What Is A DDoS Attack (And How To Prevent Them)

What Is A DDoS Attack (And How To Prevent Them) 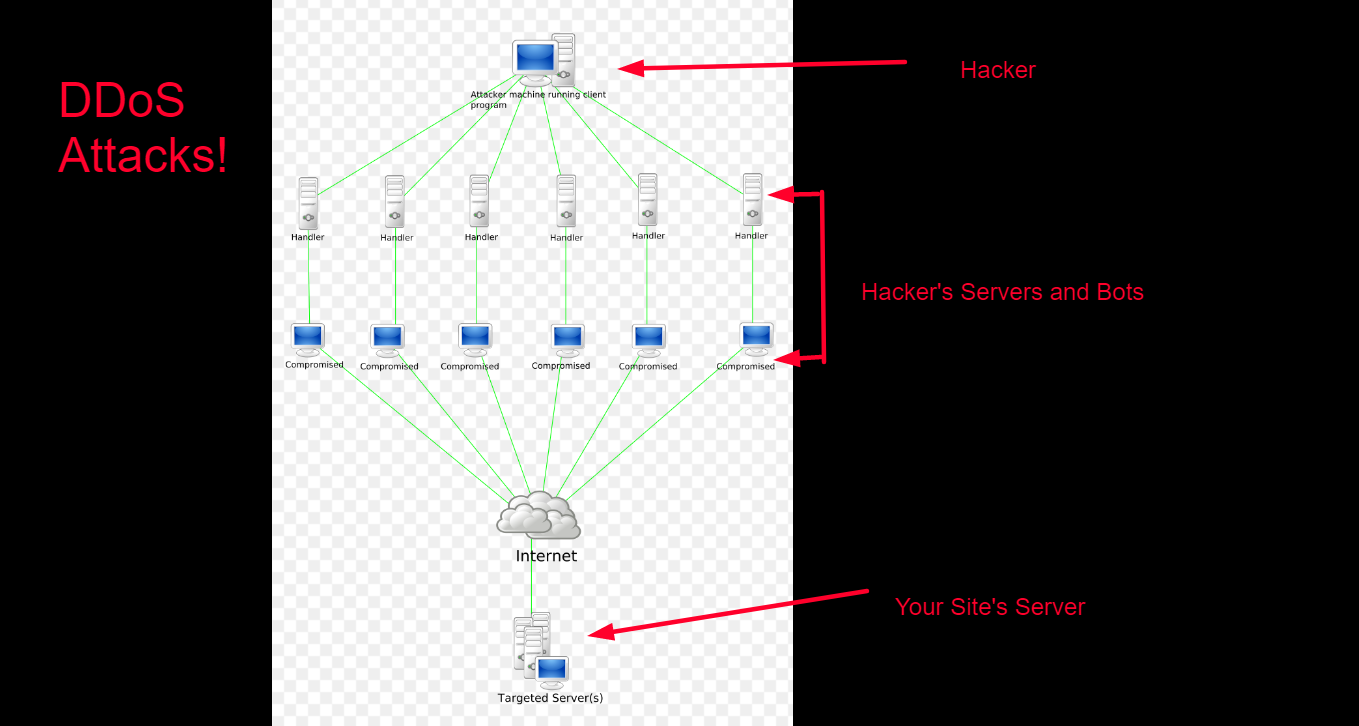 Every year, top-performing companies and sites lose tens of thousands (and sometimes even hundreds of thousands) of dollars from DDoS attacks initiated by crafty, malicious hackers from around the world. DDoS attacks are very common, can do a lot of damage, and should be taken very seriously. This is especially true if you’re running a high-traffic website or an online business.

In today’s article, we’re going to explain what DDoS attacks are, how they work, and why hackers use them to exploit businesses. Then, we’ll spend a few minutes answering some of the most commonly asked questions about DDoS attacks and explain what you can do to prevent your site from being victimized by a DDoS attack.

Usually, we try to focus on VPN-related topics and reviews. Today, however, we thought we’d take a break and discuss a more technical topic that many of our VPN users have asked us about in the past few months. Seeing as it’s a critical topic relating to internet security, it’s definitely worth your read, especially if you’re a webmaster.

Get ready to take some notes!

What Is A DDoS Attack?

If you’re like most people, then you’re probably scratching your head a little bit right about now. So, here’s a simple analogy to help you understand the concept better.

Let’s just say that you own a small retail store. On a good day, maybe you get around 200 customers and around 100 of them actually buy something. Business as usual, right?

Now, let’s just say that one day you randomly get 5,000 customers to your store. At first, it may sound great. However, take a second to think about the implications…

For one, you weren’t expecting the huge influx of customers, so you had no way of preparing and hiring extra employees to handle all of the extra customers.

Secondly, your register doesn’t have anywhere near enough change to handle the transactions.

Thirdly, having that many customers in your store at once violates the local fire code and you run the risk of getting a fine or shut down altogether.

Having 5,000 customers all at once doesn’t sound like such a great thing now, does it? Now, let’s go a step further and say that 4,950 customers weren’t even legitimate customers. They all just walked in at once with the specific intent of wasting your time, getting you into trouble, and didn’t buy anything at all. As a small business owner, you’d be pretty mad, right?

Basically, a DDoS attack is designed to overwhelm your website’s server by overloading it with traffic, confusing the site’s directory system, and inputting false data throughout the site. If you weren’t already prepared for a DDoS attack, there’s absolutely no way to stop it.

A DDoS attack could result in your entire website or server getting shut down for hours or days at a time. This means that your real customers won’t be able to access your site or get the help they need. Your customers may then become frustrated, think that you’re purposefully “denying them service” (hence the name), and write you and your brand off forever.

So now that you understand the basic concept, let’s go a bit deeper and explain exactly what a DDoS attack is. Above we mentioned that the main goal of these attacks is to deny your real customers from service.

So where does the “distributed” term come into play, then?

Well, hackers aren’t just using one computer to hack your server. Otherwise, they’d be relatively easy to defend against. All you’d have to do is block the IP address associated with the attacker and you’d be back to normal.

What makes these attacks so hard to defend against is the fact that the hacker is distributing their power over multiple devices. Often, hackers will use large multi-national networks of bots and compromised computers to perform these DDoS attacks. By controlling their own “robot army” that consists of hundreds or even thousands of devices, they’re able to completely overwhelm your server and overload it, causing your site to shut down completely.

Here’s a server-side view of what a DDoS attack looks like:

Your Device Can Unwittingly Participate In DDoS Attacks

If you were paying attention, then you may have realized above we said that hackers can use “compromised devices” to perform these DDoS attacks. Here’s where things get really tricky…

You see, the hacker typically isn’t even using their own devices, which is why it’s so hard to trace them. Instead, they’re manipulating other people’s devices that they’ve taken control of using malware to perform the attacks.

This means that your computer could be part of a DDoS attack without you even knowing it!

So, how do hackers compromise and take control of your device? Well, they can do this two different ways:

This is why it’s so important to have good anti-virus software and a reliable VPN like NordVPN installed on your device. These security measures make it harder for hackers to embed malware in your device and take control of it for their own nefarious purposes.

Why Do Hackers Employ DDoS Attacks?

Unlike other types of hacks (like DNS attacks, for example) DDoS attacks aren’t designed to provide the hacker with valuable data or information. As you probably know, the goal of most hacks is to steal valuable information, such as credit card numbers, login credentials, bank passwords, etc., that they can use to steal your identity, funds, and other information.

DDoS attacks, on the other hand, don’t provide the hacker with any critical knowledge or information. They have one goal and one goal only- causing you problems. The hackers want to shut your site down. In doing so, they’ll cause you to lose money, hurt your professional reputation, and seed distrust in your investors and customers.

That being said, sometimes there is a financial motivation behind DDoS attacks; extortion. Some hackers will use a DDoS attack to hold a website for “ransom” until the corporation that owns the website pays the hackers to stop the DDoS attack.

Who’s Targeted By A DDoS Attack?

Your everyday average Joe doesn’t have to worry about being victimized by a DDoS attack. Usually, hackers use DDoS attacks to target large corporations, online stores, and other commerce-driven businesses with an online profile. DDoS attacks require a lot of time and effort to orchestrate, which means that the hacker (or hackers) need to have considerable motivation, time, and energy to direct the attack.

DDoS attacks are incredibly hard to trace. This is because most hackers use global networks of compromised devices and bots to orchestrate the DDoS attack. While you may be able to trace some of the individual devices used in the DDoS attack, the chances are that these computers were used without the owners’ knowledge thanks to malware being embedded in their computers.

DDoS attacks are considered illegal in most modernized nations. They have the potential to cause tens of thousands of dollars worth of damage. In the United States, for example, orchestrating a major DDoS attack is considered a felony and can get hackers up to 10 years in federal prison.

How Can You Prevent A DDoS Attack?

Thankfully, there are a few different ways that you can prevent a DDoS attack. As a webmaster, here’s what you should be doing to ensure that you’re not the next victim of a DDoS attack.

DDoS attacks can be scary and have the potential to cause major harm to your business. While the average computer user doesn’t need to worry about being victimized by a DDoS attack, they should do their best to prevent their devices from being used in a DDoS attack. Installing reliable anti-malware and using a VPN is a great place to start!