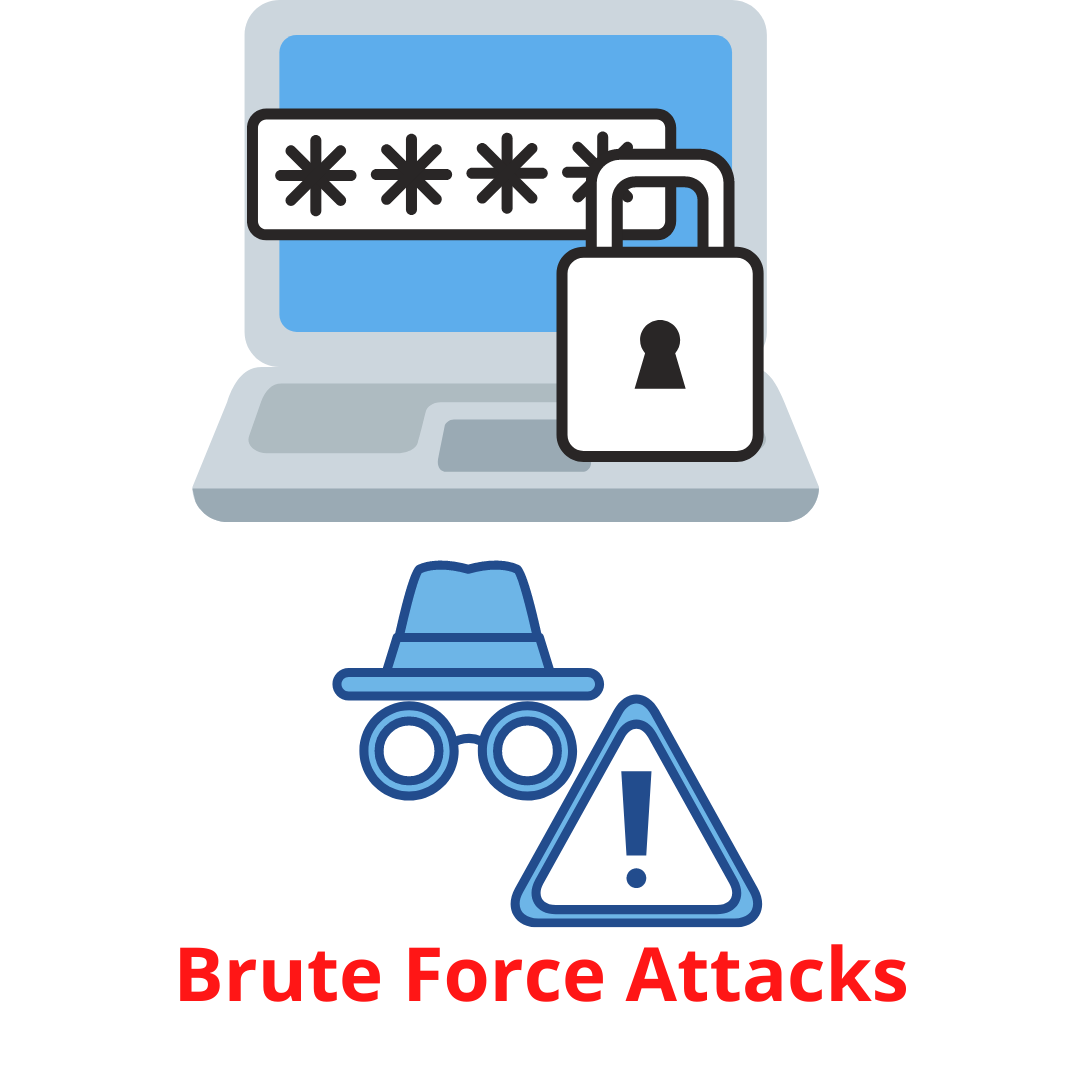 If you’ve ever watched spy movies, CIA thrillers, or even just FX’s hit animated series Archer, then you’ve no doubt come across the term “brute force” used in terms of hacking. It always tends to stand out as an odd term given its rather physical, brutal nature.

The way it sounds, you’d think that you were trying to kick a door down or something, right?

Well, in a way, a brute force attack is just that; except instead of kicking down a physical door, you’ll be infiltrating a personal account by guessing a user’s password.

In days past, brute force attacks were far more common due to the fact that the internet wasn’t very secured. Today, the average internet user is a bit more secured and may be using anti-virus software, a VPN to mask their traffic, and other browser security plugins designed to protect them against dangerous third-party hackers.

That being said, brute force attacks are still a threat. Especially when it comes to hacking into larger servers or personal accounts that have access to funding.

In today’s post, we’re going to spend a little bit of time discussing brute force hacking attacks. We’ll explain what they are and how they work, the different types of brute force attacks, and what you can do to prevent yourself from being victimized by a brute force attack.

Are you ready to defend your online fortress?

What Are Brute Force Attacks?

When most people think of hacking, they tend to think of clever workarounds, undercover viruses, and other more slick hacking activities. However, the most simple method of hacking just involves guessing the password. Before hacking software was invented, hackers would do try to guess important passwords by researching the owner’s personal data and trying to figure out possible words, terms, and numbers that they’d use for a password.

Basically, brute force hacking software is just classic “guessing” on steroids. That’s why it’s called “brute force.” There’s nothing special or even that advanced about a brute force attack; they just throw hundreds of thousands of possible password strings together until they land on the right one. It’s kind of like playing a game of slots in Vegas.

Here’s an example of how a brute force hacking attack may look from a computer console that’s running rudimentary hacking software:

Why Are Brute Force Attacks Used?

Now, you may be wondering, “If brute force hacks are so dumbed down, why are they still used?” After all, why wouldn’t hackers just try to use another more advanced form of hacking software or methodology?

Well, this is for two reasons:

The main reason brute force attacks are so popular is that they’re easy. A 10-year-old could download an easy-to-use brute force hacking software on their device and start trying to hack into a secure website or user account.

You don’t need a lot of knowledge about computer science, advanced coding, or networking. All you need to do is enter a few commands on your device’s command console and the hacking software will do the rest of the work.

Secondly, if you can manage to log in to a secured account using the correct username and password pair, it’s a lot simpler than other, more advanced hacking methods. Once you have the password and username combo, you can log in to the account at any time you want without experiencing any security issues (as long as it’s not protected with two-factor authentication).

How Long Do Brute Force Attacks Take To Work?

How long brute force attacks take to work is completely dependent on the amount of computing power the hacker has access to and how easy a username and password combination is for the hacking software to guess. For example, if you had a two-digit password that consisted of two numbers, there would only be a hundred possibilities. A brute force attack could guess the right password in under a minute.

The longer and more complex the password is, though, the longer it takes the brute force software to penetrate the account. Every digit you add to a password exponentially increases the number of possibilities. This means that advanced passwords could take several years of a brute force program constantly running to hack (which is more time than most hackers have to devote to a single project).

How powerful a brute force attack is completely depends on the amount of processing power that the hacking software has access to. For example, if you’re just running the program on your laptop, you’ll find that the software is only able to guess a certain number of possible passwords per minute (maybe around 25 to 100, depending on your device’s processor).

However, if you hook multiple computers up together or use a large server to execute the brute force attack, the hacking software may be able to guess thousands of different password combinations per minute.

This is also why quantum computers are going to revolutionize the hacking and cybersecurity sectors. With access to quantum processors, hackers could orchestrate brute force attacks far quicker and more efficiently than they’ve ever been able to in the past.

How Do You Defend Against Brute Force Attacks

Thankfully, brute force attacks are a lot easier to defend against than you might think. Since the attacks are rather simplistic in nature, defending against them just requires some basic common sense and adherence to internet security measures. Here’s what you can do to defend your device and accounts from a brute force hacking attack.

1. Use a VPN To Mask Your Online Activity and Identity: One of the best things you can do is to anonymize your internet traffic. By using a VPN like IPVanish while you’re browsing, you’ll reduce the likelihood of you becoming a target, in the first place!

Essentially, a VPN “tunnels” all of your internet traffic through a highly secure server located in another region. This, in turn, makes it look as if you’re accessing the internet from an entirely different region and encrypts your internet data and traffic so that it’s nearly impossible for hackers and third parties to tell which sites you’re accessing.

2. Only Submit Personal Information On SSL-Certified Sites: If you’re creating online accounts, make sure that you’re only creating them on sites that are SSL-Certified. These sites will have a small “lock” icon by the URL address, signifying that they’re protected and that all data entered into forms is encrypted. This means that hackers won’t be able to view potentially vital details, such as your email address, how many digits your password is, and the answers to various security questions.

3. Use Two-Factor Authentication: When it comes to your personal accounts (especially banks, crypto accounts, and other money-related services), you should always use two-factor authentication. This means that nobody, including yourself, will be able to log in to your account without answering a verification message sent to your phone number or email address.

So, even if a hacker is able to use a brute force attack to gain access to your account, it won’t do them any good unless they have your phone or are able to access your email account.

4. Use Secure, Random Passwords: The more complex and lengthy you make your passwords, the harder it is for brute force programs to guess them. Try to use combinations of upper and lowercase letters, numbers, and special symbols. Don’t use obvious terms like your pet’s name, spouse’s birthday, etc. And definitely don’t use “password123”!

5. Change Your Passwords Regularly: In addition to creating complex passwords for your accounts, we also recommend changing your passwords regularly. Let’s just say that you’re being targeted by a brute force attack and that the particular program is going to take around 3 months to guess your password…

Well, if you’re changing your password every 2 months, then it would be nearly impossible for the brute force program to catch up to you (outside of a random lucky guess).

If you’ve had your password or login credentials stolen by a brute force attack, then you’re not alone. The good news is that most modern websites and platforms utilize two-factor authentication, cross-reference your device history to check if foreign devices are attempting to access your account, and other safety protocols to make it harder for hackers to get access to vital information.

If you’ve had your password stolen, the best thing you can do is contact tech support for the platform and discuss the incident. They’ll normally be able to help you get your account back and prevent the incident from happening in the future.

Being proactive is, by far, the best way to prevent yourself from being targeted by a brute force attack. Make sure you use a VPN while browsing on public networks, torrenting, or accessing secure or sensitive sites. Also, make sure that you’re performing regular scans on your device and browser using an anti-virus and anti-malware program.