Stay Anonymous: How To Send An Encrypted Email

Stay Anonymous: How To Send An Encrypted Email 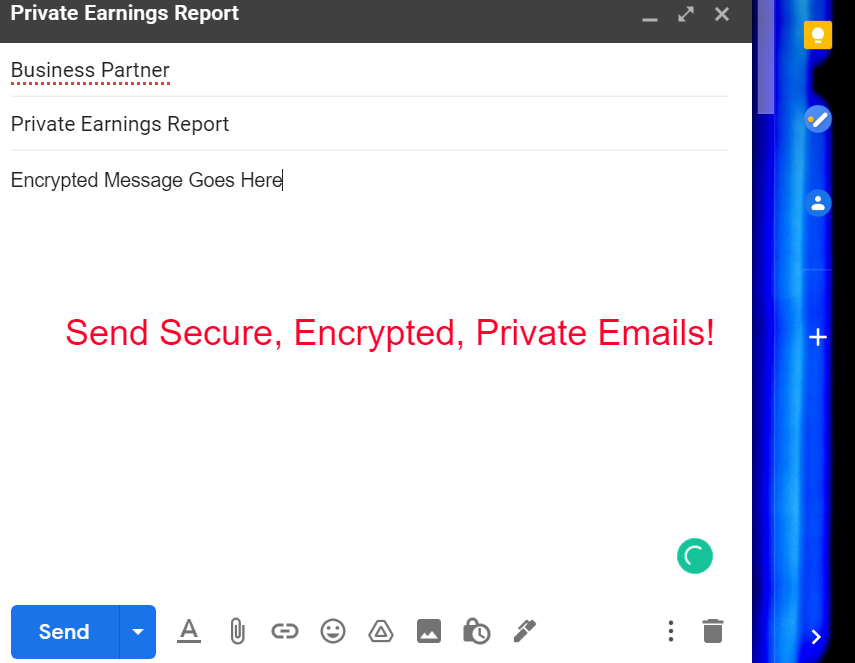 These days, it’s more important than ever to be vigilant about your internet security. Everything from the login credentials to online shopping platforms to the contents of your “private” emails is a hot commodity on the dark web.

Every day, hackers steal critical and/or sensitive information and data from unsecured browsers and devices, listing them for sale to the highest bidder on darknet marketplaces. Scammers purchase this data and then use it to blackmail users, gain access to their personal accounts, or just send you tons of SPAM mail. Sound familiar?

Chances are, you’ve unwillingly been the victim of this. If your phone or email has received scammy calls and messages, then there’s a good chance that your private contact information was exploited on the web at some point in the past (or maybe even currently)!

One of the best ways to ensure that your internet data is secure and private is to use a Virtual Private Network (VPN, for short) while you’re browsing on unsecured or public networks. This encrypts all of your data, login credentials, credit card numbers, etc. that you may be inputting on various sites and online platforms.

Another great tactic you can use to keep yourself from becoming a victim of scams and spam mail is to get in the habit of sending encrypted emails. Encrypted emails are only readable by the sender and a specified receiver who has a unique “key” that decrypts your email’s contents and makes it readable.

In today’s post, we’re going to show you exactly how to send encrypted emails using your favorite webmail services like Gmail, Yahoo Mail, and others. Isn’t it time you started taking your internet security seriously?

Recently, we did a piece on how to send anonymous emails. While encryption and anonymity often go hand in hand, they’re two very different things that are accomplished with different methods. Here’s a simple breakdown to help you remember the difference between the two security features:

How Does Email Encryption Work?

Encryption has been around for centuries. In fact, cryptography first became popularized during the first two World Wars. Spies on both sides created their own codes using code words, code names, symbols, and numbers to send private messages that would just seem like random gibberish to anybody who didn’t have the key to decrypt the code and understand the message.

For example, the phrase, “I’m going for a walk” could mean something like, “My cover is blown and I need to get out of the country before the enemy catches me.”

When you encrypt an email (or any data, for that matter), the contents of the email are scrambled into random letters, symbols, and numbers. The person who you’re sending the encrypted email to will have a special public key that you provide them with, that allows the receiver to decrypt your email and read its contents.

Essentially, encrypting your email makes it nearly impossible for hackers, ISP providers, email service providers, and government agencies to read your emails. Only you and the person on the other end are able to read the message, ensuring total security.

Now, you may have read an article saying that some mobile emails and messages are encrypted. While Android and Google don’t have native encryption built into their messaging systems, most of Apple’s native messaging and email software is already encrypted using S/MIME encryption technology.

If you’re using Microsoft Outlook as your primary mailer, this software also allows you to turn on encrypted emails. This is why Outlook is commonly used for internal company emails by larger corporations.

If you happen to have an Android device, you can encrypt your emails using various encryption apps, such as HushMail or ProtonMail (both available on the Google Play Store).

This guide is primarily focused on showing you how to encrypt webmail sent from your computer, using Google Chrome-compatible plugins. However, the process itself should be almost identical for mobile devices.

How To Encrypt Webmail Emails: Step-by-Step

Alright, so now for the part you’ve been waiting for; how to send an encrypted email through a webmail service like Gmail or Yahoo Mail.

As we discussed above, most Apple emails are encrypted and you can also send encrypted messages using Microsoft Outlook. So, given that this is mostly common knowledge, we figured that we’d focus on the more complicated process of encrypting your webmail emails with this article.

1. Download Mailvelope Chrome Extension For Encryption: For this process, we’ll be using a free Chrome browser plugin called Mailvelope. It works in your browser and allows you to simply and easily encrypt any email using whatever webmail service that you’re used to. Here’s the Google Chrome extension.

Once it’s downloaded, you may need to close and re-open your browser to finalize the installation.

2. Generate Your Encryption Key and Verify Your Email Address: Once you’ve completed the download, you’ll see the little “m” icon in your extensions/plugins bar while you’re in the Chrome browser.

Before you being sending and receiving encrypted emails, you’ll first need to set up your Mailvelope account. Thankfully, it only takes a couple of minutes.

First, click the icon. Then, you’ll be prompted to register your email address with Mailvelope. Input your primary email address you’ll be using to send encrypted emails and create your password. Then, your unique private key will be generated for that email account.

Lastly, you’ll need to open the verification email sent to you by Mailvelope. After confirming, you’ll be ready to start sending encrypted emails! 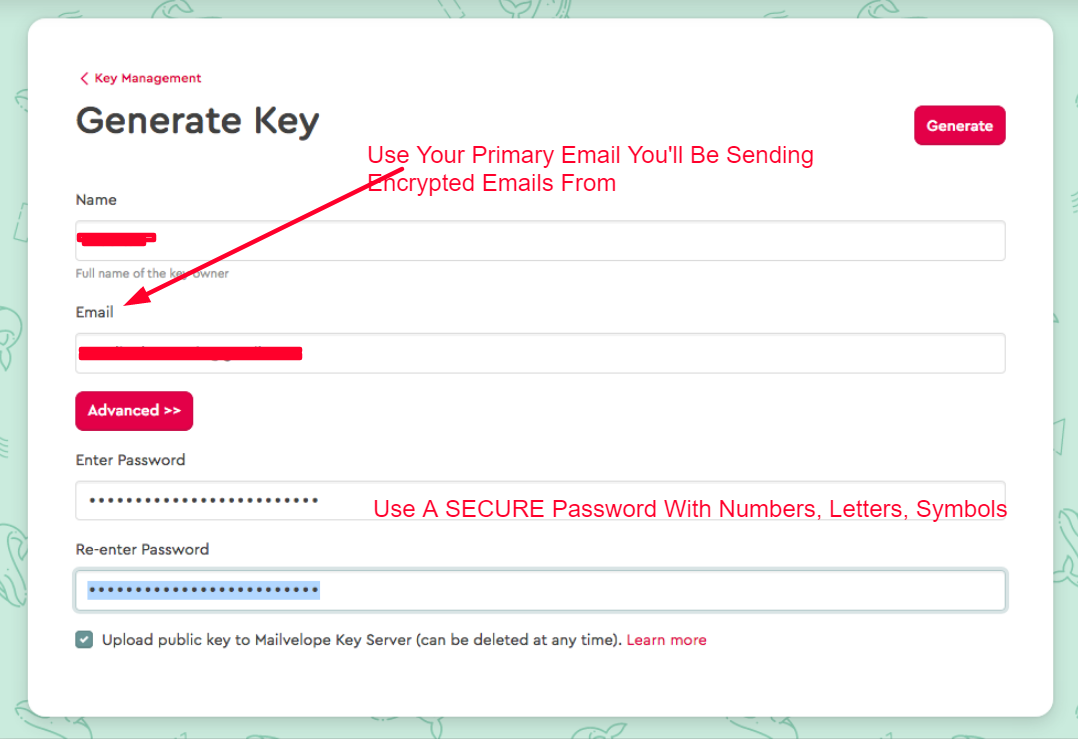 3. Set Up a VPN For Extra Anonymity: At this point, it’s worth mentioning that you should use this encryption method with a VPN service to ensure total security. Even though the encryption will scramble the contents of your email, third parties will still be able to see where the email is being sent from, which can compromise your privacy.

Thankfully, there are a lot of great VPN services that offer free trial periods and low entry costs!

4. Open Your Gmail/Webmail Account and Compose: Now that you’re all set up with Mailvelope, it’s time to send your first encrypted email.

*note*: You can only send encrypted emails to recipients who have their own encryption/decryption software/plugins. The simplest way to accomplish this is to have your recipient download Mailvelope as well. However, your recipient can also use their own key storage software with your Mailvelope key.

So, it’s time to send your first email… Open up your webmail account as normal, and navigate to the screen where you’ll compose your message.

5. Click The Mailvelope Extension Icon: At this point, your browser should recognize that you’re about to compose an email and the little “m” symbol for Mailvelope should pop up on your screen for you to select. If not, then manually click the “m” symbol in your browser extensions bar. 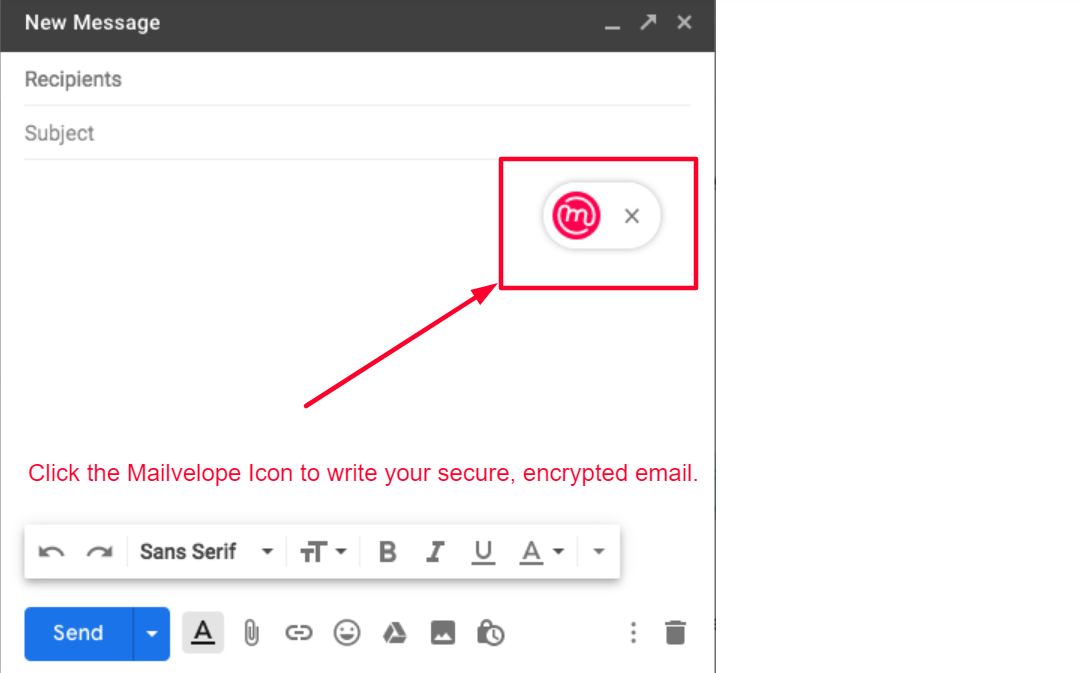 6. Write Your Encrypted Email: Mailvelope will open a pop-up screen where you’ll be able to write your email message. Then, hit the button that says ‘Encrypt’ in the bottom-right-hand corner. It will take a few seconds to encrypt your message, and then it will automatically paste your encrypted email text into your webmail’s editor.

Now, all you have to do is write a subject line. Just remember that your subject is the only thing that won’t be encrypted. So don’t give away any sensitive info in the subject line!

How Secure Are Encrypted Emails?

Encrypted emails are very secure and are tested against numerous penetration methods. However, if you want to ensure that your emails and internet data are completely secure, then you’ll want to take a few extra steps to lock down your online data.

This means you should be using a VPN whenever you’re on unsecured or public wi-fi networks to ensure nobody is snooping on your desktop or internet data. VPNs will also prevent government organizations, internet service providers, and hackers from viewing what you’re doing online.

Additionally, you should also use a high-quality, reputable antivirus software that scans your device and your browser’s extensions regularly to ensure that there’s nothing fishy going on behind the scenes. If you combine modern encryption tactics with antivirus software and VPN security, hackers and third parties will be hard-pressed to get their hands on your sensitive data.