At PinpointVPN, we love any tool that keeps you and your info safe when you browse the internet, and those tools don’t necessarily have to include VPNs like Perfect Privacy or Cyberghost.

Using a VPN will only keep you safe from people trying to invade your privacy for so long. If you want to make sure that your time on the internet is as safe as possible, you’ll want to ensure that your email isn’t getting snooped on as well. In this article, we’re going to examine some of the top secure email providers out there.

ProtonMail is based in Switzerland and they’re one of the world’s most popular secure email providers. Among their benefits is the fact that ProtonMail is entirely open-source and that the provider works on both Android and iOS in addition to working on desktop and laptop computers.

To ensure that ProtonMail is as secure as possible, even people who work for the company have absolutely no access to your mail. In fact, the company is proud to advertise that their data centers are located hundreds of meters beneath the earth, ensuring that your info will be sure even in case of a cataclysmic event. It’s pretty reassuring to know that your data will still be secure even if the world ends!

Another great thing about ProtonMail is that the free version is remarkably reasonable, allowing you to send and receive 150 emails per day, which is more than the vast majority of non-corporate users need. You’re also limited by 500 MB of storage, which is quite a bit as long as you’re not sending photos and videos all the time.

The great thing about the paid versions of ProtonMail is that you’re able to adjust the plan to your liking, allowing you to choose between varying storage limits. You can even opt for multiple email addresses so that you can seamlessly swap between them whenever you need to.

Mailfence is headquartered in Belgium, which isn’t too far from ProtonMail’s base of operations. Much like ProtonMail, Mailfence believes in its users’ security above all else. To make sure of this, they offer end-to-end encryption for your emails, which isn’t exactly unique but is always reassuring.

Much like ProtonMail, Mailfence will allow you to have up to 500 MB of free email storage, though they have a few features that set them apart. For example, Mailfence comes included with a Keystore, which keeps track of your OpenPGP keys. However, you can also send encrypted emails to non-PGP users.

One of the issues with Mailfence when you compare it to the competition is that it’s not open-source, so you can’t be entirely sure that it’s as secure as something like ProtonMail. While user encryption info is stored on Mailfence’s servers, the info is encrypted with the user’s own passphrase, so Mailfence won’t have access to it.

As with ProtonMail, you can pay for additional storage as well as the ability to come up with your own email domains. Another advantage of Mailfence is that it’s widely considered to be one of the most secure email platforms because of its exceptionally strong encryption. 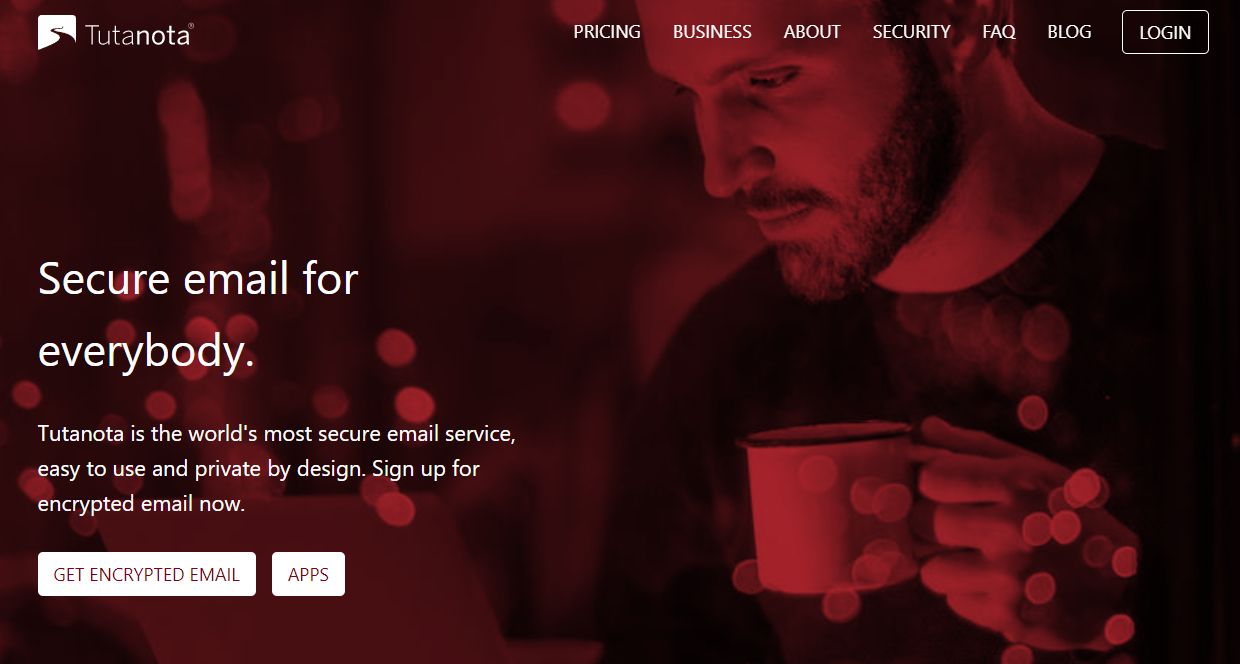 Yet another secure email provider based in Europe, Tutanota comes from Germany, and it provides security that is on par with Mailfence’s. Tutanota mentions that they care about their users’ privacy, and they go to exceptional lengths to ensure that that privacy doesn’t get compromised.

For example, when you send an email through Tutanota, the message is sent in an encrypted form and it is only decrypted once it reaches the recipient’s device. This means that the encryption key can’t be accessed by anyone trying to snoop on what you’re doing.

If you’re sending an encrypted email that hasn’t been encrypted by the Tutanota system, you can simply create a password that your recipient will be able to use to access the email that you sent them. This will also allow them to send you a secure response using the same password system.

One great thing about Tutanota is that it’s easy to use, so if you’re not accustomed to using secure email providers, you’ll be able to easily navigate through the Tutanota interface. Keep in mind that this provider’s main weakness is that it doesn’t allow you to search through previous emails.

Hushmail is based in Canada because it features stricter privacy laws than the US and other first-world countries. This ensures that you’re not only protected by quality encryption algorithms but also the power of the law. This secure email provider uses OpenPGP to ensure that your emails are encrypted.

This is done through connections that are secured using SSL/TLS. There is an optional two-step verification process that will also ensure that your emails are as secure as possible, though this will make sending and receiving emails a bit more tedious than it would be otherwise.

Keep in mind that Hushmail has no free versions, so they lose a few points for that, but they let you try out any of their plans for 14 days without even having to provide them with credit card info. You’ll find yourself paying about $50 per year for a subscription, which is relatively affordable compared to the competition.

Since it’s paid, you’ll get 10 GB of email storage and there’s even an autoresponder and a spam filter, which shows that Hushmail cares about the experience of their users as well as their security. Keep in mind that the verification process for Hushmail is a bit tedious, since you’ll have to provide them with a phone number and an email address.

Countermail is one of the oldest secure email providers. They’ve been around for ten years and the company is based in Sweden. The company’s servers will only store emails that have been encrypted to ensure that even they can’t see the contents of your emails.

So how does Countermail ensure that your emails aren’t visible to prying eyes. First, they use OpenPGP 4096-bit encryption. The impressive thing about Countermail is that they don’t even store the emails on actual server hard drives. Your data is instead stored on CD-ROM.

You can also configure Countermail to work with a USB key that will have to be connected to the device that you wish to access your emails on. This means that your account will be fully secure even if someone ends up with your password in their hands.

While this makes Countermail a little less easy to use, it also makes it much more secure than many other secure email providers. One major downside to Countermail is that the free trial only lasts for a week and it only features about 3 MB of space, so you won’t be able to put it through its paces to a huge extent.