Just How Safe Are Smart Cars?

Just How Safe Are Smart Cars? 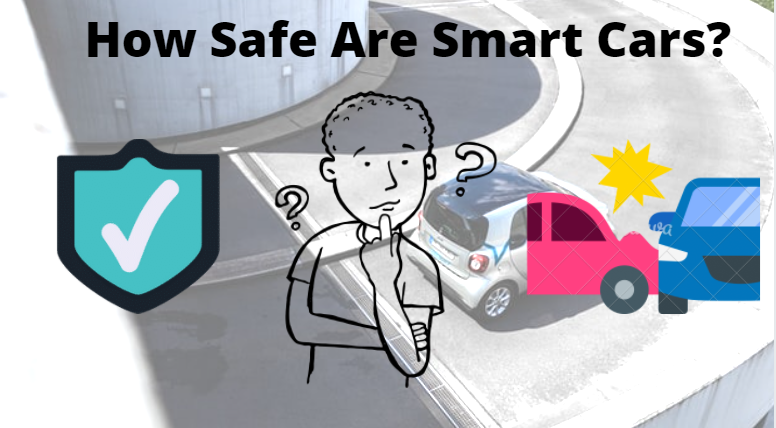 Believe it or not, the Smart company first started experimenting with its concept in 1994, long before the rise of electric vehicles around the world. They were first sold in the United States in 2008, where they managed to sell 25,000 units. Not bad for an entirely new electric concept car, right?

However, time hasn’t been exactly friendly to the company. As more attractive electric cars became available in the US market, Smart Car sales dropped dramatically. In the following year (2009), sales drop to just under 15,000 units. Last year (in 2020), the brand was discontinued after it only managed to sell 680 units in 2019.

That being said, a host of affordably-priced smart cars have flooded the market. Most 2012 to 2018 Smart Cars can be found priced between $11,000 and $16,000, depending on the year, trim, and overall condition of the vehicle.

The only question is, how safe are Smart Cars?

Below, we’ll show you some quick safety statistics and facts about Smart Cars. We’ll explain safety from an engineering standpoint and also take a look at what the statistics say regarding Smart Car accidents. Let’s take a look!

Some Quick Facts About Smart Cars

If you’ve been keeping up with our content, then you’ve probably gathered that this isn’t a car blog. Typically, we stick to our guns and write about internet security and offer guides on how to overcome internet censorship and geo-restrictions by using high-quality VPNs like NordVPN or ExpressVPN.

Today, we’re changing it up a bit though…

One of our new team members just pulled up in a Smart Car while we were brainstorming content for the week. Two minutes later, and the whole room suddenly had an opinion about Smart Cars! So, we decided that Smart Car safety would make for an engaging and interesting blog topic.

Before we get into our review of Smart Car safety specifics, let’s take a look at some quick facts about Smart Cars that have made them a truly iconic and interesting brand:

How Safe Are Smart Cars?

Now that you know a little bit more about the brand and some interesting facts about Smart Cars, let’s get discuss one of the primary conversation points of the car. Overall, Smart Cars are safe vehicles. They have good safety features and a safety-conscious design.

However, their incredibly small size is the thing that tends to concern buyers the most. Many people refer to them as “soccer balls,” while envisioning the way that the car would get “kicked” around in a serious accident.

Before you hop on the bandwaggon, though, let’s take a more detailed look under the hood at why Smart Cars are safer than most consumers may think.

What The Engineering Says…

While Smart Cars aren’t exactly designed to withstand a round of bumper cars, they have an NHTSA score of 4 out of 5 for their class. The IIHS (a similar car safety and insurance group) has also ranked the Smart Car a 4 out of 5. On their scales, this means that the Smart Car scores “good.” It’s not the safest car on the market, but it’s certainly above average.

Part of the reason why the Smart Car is safer than it looks is thanks to Mercedes Benz expert innovation and safety features. For one, the vehicle features a Tridion safety cell. This provides a solid hemispherical cage of steel that surrounds the vehicle and lies underneath the main panels. It’s invisible to the eye but provides excellent protection in the event of an accident.

This safety cell acts much like a roll cage built into race cars. Essentially, it will prevent the vehicle from being crushed, sheered, or crumpling under heavy impact. While the outer parts of the vehicle may be destroyed, the Tridion safety cell keeps the occupants safe from direct impact.

Additionally, the Smart Car features plenty of airbags, smart seatbelts that adjust with velocity changes, and anti-lock brakes to prevent the driver from losing control of the vehicle. 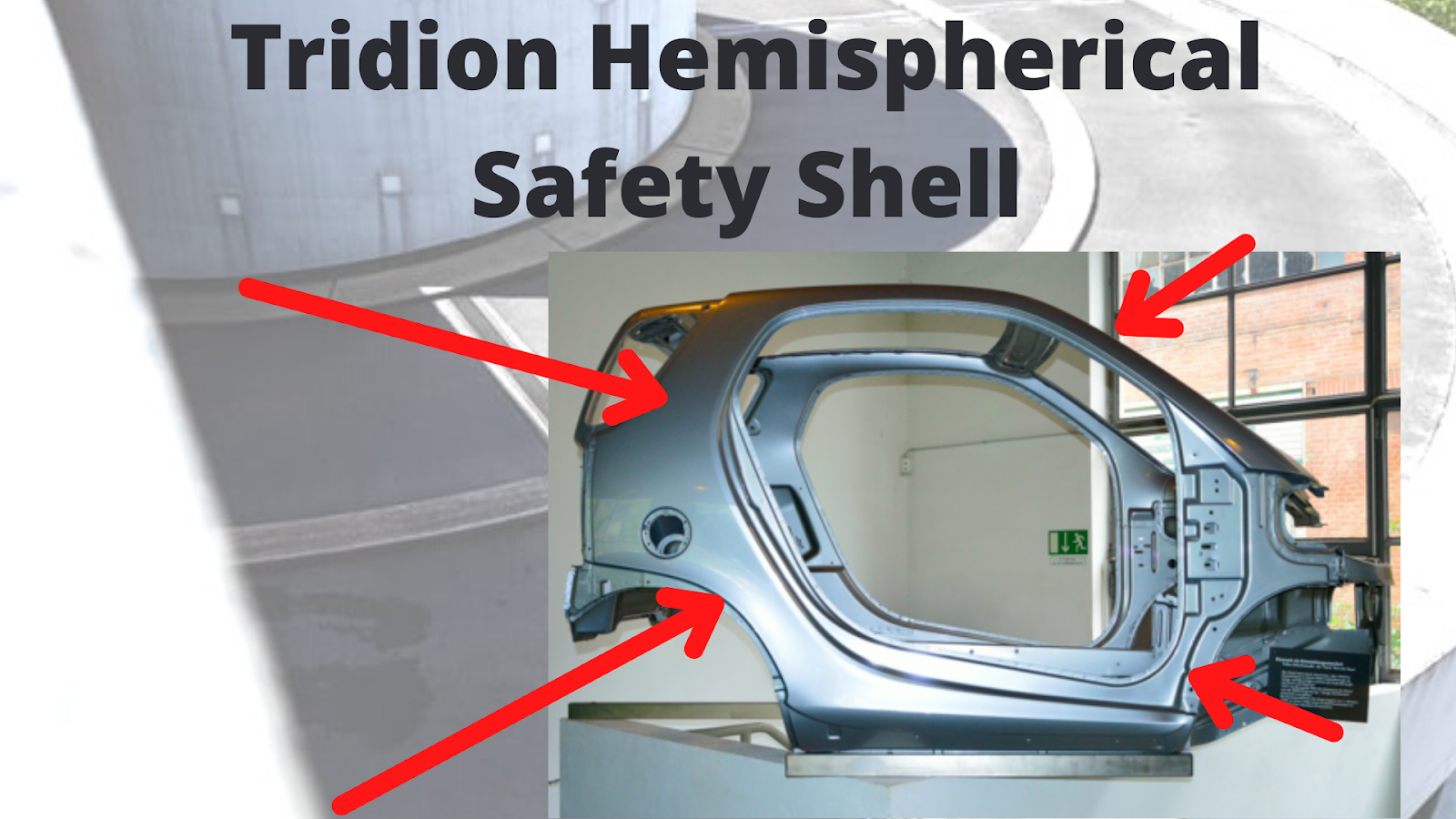 For those who are looking for a more in-depth look at Smart Car safety features, here are the key features and design elements that have helped the Smart Car receive its 4 out of 5 rank by the NHTSA and IIHS.

1. Tridion Safety Cell: As we discussed above, Smart Car’s Tridion safety shell provides a solid “cage” of steel designed to keep the vehicle’s occupants safe from crushing forces and high-speed impacts.
ABS Brakes: Smart Cars have an Anti-lock Braking System (ABS) that prevents the brakes from locking up if you lose control of the vehicle. These can also help if you’re driving through water, ice, or snow as they’ll prevent the car from hydroplaning or losing traction.

2. Additional Knee Airbags: Given the compact nature of Smart Cars, there’s not a lot of legroom, which means that passengers are more vulnerable to sustaining an injury to their legs in the event of an accident. To defend against this, Smart Cars feature airbags that ignite near the legs to protect your knees.

3. Crosswind Assistance: Since the Smart Car is so light (just over 1,500 lbs), it can be blown around by wind forces more easily than a larger, heavier vehicle. If you’re driving at highway speeds, this can be a real danger.

However, modern Smart Cars come equipped with built-in crosswind assistance. This program senses when there are high winds and acts to stabilize the vehicle by providing more power to certain wheels and extra braking when necessary.

4. Electronic Stability Programming: The ESP system works similarly to the crosswind assistance programming. If the engine computer senses that you’re swerving or losing sudden control of the vehicle, it will kick in to provide braking and extra wheel power to help the car regain stability.

5. Tire Pressure Sensor: One of the number one causes of accidents on the highway is when tires suddenly lose pressure, causing you to lose control over an entire side of the car. Smart Cars feature tire pressure sensors built into each wheel, so you’ll get a fair warning if your pressure starts to drop out of the blue.

6. Hill Start Assistance: If you live in an area with lots of hills, then this is an incredibly useful feature. If you’re starting your vehicle on a hill, your Smart Car will automatically apply the brakes so you don’t have to worry about sliding backward (or forwards) in the small space while you’re waiting to accelerate.

What The Statistics Say…

So, now that you’ve had a chance to look at the design elements of the Smart Car for yourself, you’re probably thinking, “All of these safety features seem great and all, but what do the actual statistics say about the Smart Car’s Safety?”

Well, when it comes to deadly accidents, 30 per million people die in the event of a Smart Car accident. The average for most cars is between 32 and 38 per million, making Smart Cars slightly safer than average.

However, part of this can also be attributed to the fact that there are fewer Smart Cars on the road compared to other types of vehicles.

Smart Cars will typically cost around the same amount to insure as a similarly-priced small sedan or economy car would. The biggest determining factor of your insurance rates (other than your age and driving record) is the estimated value of the vehicle. This means that older, cheaper models will be less expensive to insure than newer, more expensive models.

So, are Smart Cars safe enough to warrant driving one?

We think so. With the Tridion safety cell to protect against heavy impact and the added airbags, your Smart Car should keep you just as safe (if not a bit safer) as another small subcompact or economy car would.

While the statistics for sub-compact cars still aren’t as good as they are for larger vehicles, the Smart Car is still ranked as “good” by the top insurance and vehicle safety groups in the United States.