The United States has enjoyed a century watching movies that defined and changed culture and the arts. Around the world, the US dominates in movie production and viewership, even as a plethora of local movie industries has been spawned along the way.

The internet changed how movies can be viewed, even as it changed TV viewing habits and introduced podcasting as an industry. In some ways, we’re cycling through new technologies and recycling our old favorites in the process. We used to listen to the radio, but now we listen to podcasts; we used to watch TV, but now we watch YouTube or Netflix; we used to go to the theater, but now we watch our favorite movies from the comfort of our couch.

How we access our entertainment content is big business. The question we want to look at today is whether accessing movies by internet download is legal….or not?

A Brief History of Movie Downloading

Years ago, moviegoers brought a revolution to how we viewed our most popular stars when we moved a huge portion of our movie consumption to our homes. Video rentals were the rage and Blockbuster became the affordable go-to for accessing our favorite flicks.

But the internet changed everything. Seemingly overnight, we went from needing a physical videotape to needing an internet connection with sufficient speed and bandwidth.

In the days of Napster, there was heated debate about whether accessing music, videos and movies online was moral, ethical and/or legal. A sub-culture of determined free-access users grew. Rumblings of ‘open source’ and ‘free access’ blurred the age-old definitions of creator content ownership and copyright law.

Enforcement was also an issue. If there was a law to prevent access to content, but there was widespread user knowledge of how to bypass technical restrictions, who would prosecute and how? Even where to prosecute became a complicated issue, as each country developed its own laws concerning ownership and distribution of digital content.

The primary ethical argument has never changed: if an artist makes a piece of art and it is consumed, unless the distribution is intentionally fee-free by artist consent, the artist deserves to benefit financially. Any third-party distributing content (and sometimes charging pay-per-view or pooled-cost fees) without distribution permission is profiting from the artist’s work when the artist isn’t.

Digital content copyright law took a big step forward in the US in 2019. The Protecting Lawful Streaming Act of 2020 (PLSA) was the most recent attempt by lawmakers to penalize those who benefit financially from distributing materials they do not own. Financial penalties and the severity of the criminal definition were both increased significantly in order to target large-scale abusers.

But where did that leave the average Joe? If he could find a movie he wanted to watch online, could he download it? Is that an illegal activity? Would he be prosecuted? What if ‘everybody’s doing it’ — would that change the picture by sheer force of large-scale behavior? 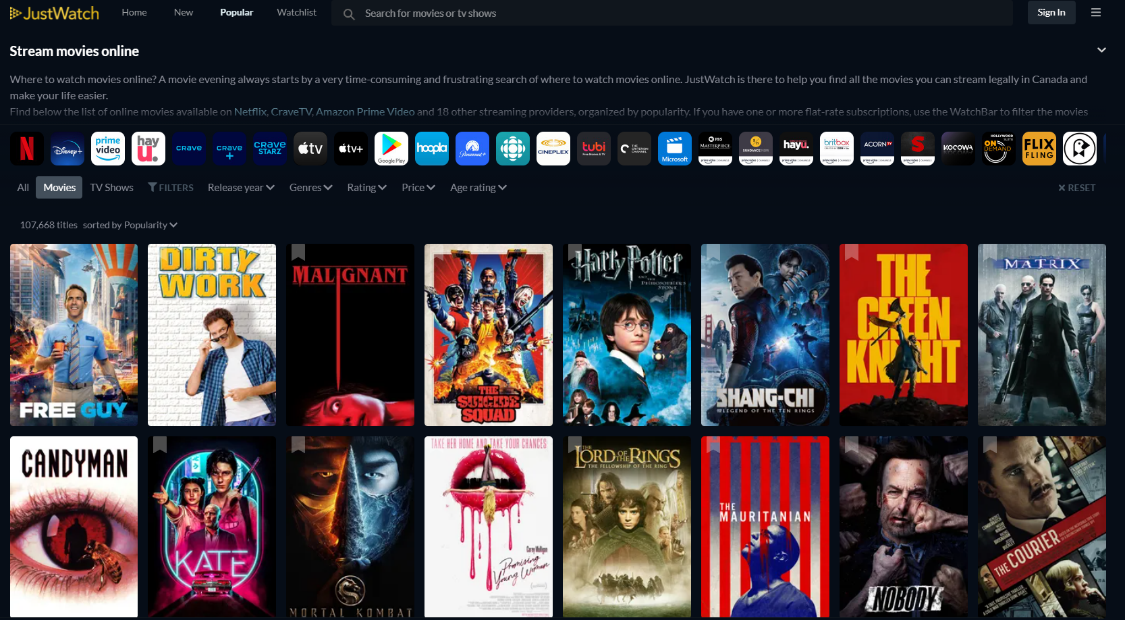 Before we go too far down the path of whether viewing movies in the comfort of your home is legal or not, let’s look at the different types of viewing. Particularly during our pandemic period, how to consume entertainment media at home has become a ubiquitous issue for all households.

When you want to watch a new release movie online, you have two ways to view the digital file: streaming and downloading.

Streaming a movie involves watching the show as it comes through your internet connection without your computer or hardware device obtaining a copy of the digital file in its memory storage. The movie, when streaming, can be stopped and restarted, but the file is only accessible through a third party. Streaming services are easily tracked and regulated; therefore, they have emerged as the go-to solution for pay-for-view media content.

And there is a wide variety of streaming one can do for free. Even full-length movies are available for free on YouTube, for example. Google Podcasts advertises thousands of free-to-listen content sources. Music videos, once the realm of television’s MTV, can now be accessed for free online immediately after release.

So, why would a consumer pay to watch a movie at home, then, if so many forms of digital entertainment content are online for free? Simply put, because of copyright permissions. It is illegal to distribute copyrighted material without the copyright holder saying it is permitted.

Which brings us to another technicality. If the distribution is illegal, but the item is distributed anyway (or it is distributed through a global jurisdiction where it is legal to do so), is accessing or viewing the material illegal?

Before we look further at these complex questions, let’s review the most obvious places to view movies without worrying about the ethical or legal consequences. There are now many streaming services that offer unique content, consolidator services (similar to old-school TV access with multiple “channels” having unique program offerings) and even free access. This is confusing, we know, but “free access” could be provided through copyright permissions for public, institutional, educational, non-commercial and other specific reasons. Some material is considered part of the public domain and could be widely accessible without fee or legal restrictions.

Here are some of the movie streaming services you might be familiar with:

Movies accessed through these services can be watched without legal concern and are streamed, not downloaded, during the viewing process.

Downloading (and What about Torrenting?)

If you want to watch a movie you haven’t paid for and that you found through a third-party distributing it for free without copyright permission, then you’ll be downloading. Although it is technically possible to use streaming for the same type of access, the force of the recent laws has eliminated this avenue of access from proliferating, so access through direct download is the more likely route. Because of the file size involved in a full-length movie, you are likely going to use a process called torrenting to download. But is downloading (or torrenting) of movies legal?

Once again, we need to emphasize that viewing copyrighted movies without permission isn’t necessarily illegal….but distributing and downloading are, at least in the US.

Those who choose to access movies for free anyway will likely be using a process called torrenting to download. Torrenting uses BitTorrent technology to facilitate large file transfers. It is also traceable activity due to the substantial file size/download speed involved and this volume may draw unwanted attention to a user’s IP address.

It’s important to note that torrenting, as a technology, is legal. It has legitimate uses for many different purposes. However, its common usage for downloading “pirated” copies of electronic media means that torrenting’s reputation is closely intertwined with (and tarnished by) its frequent use for illegal activity.

Copyright law is a national issue. In the US, accessing copyrighted materials without permission is illegal. However, not all countries have the same laws.

These regional differences are highlighted by the traceable nature of torrenting. Due to the considerable file sizes involved, torrenting is easily detected by ISP (internet service providers). The downloading device’s IP address can then be isolated and identified and this is relevant for copyright prosecution measures, for example.

There is a way to obscure a downloading/torrenting device’s IP address by using a VPN (virtual private network) service. VPNs route internet traffic through a series of dispersed points and the IP address of the sender/receiver are disguised in doing so. In addition, some VPNs have a “no-log” policy where all search traffic is deleted so there are no records retained. Some VPNs have a “kill” policy, as well, where identification of IP addresses is prevented even while the torrenting activity is taking place.

For more information on VPNs, PinpointVPN offers service-specific details. Reviews indicate that ExpressVPN has a no-log policy that allows for torrenting activity with anonymity and SurfShark is seen as an affordable VPN with the latest encryption. It’s important to remember that VPNs and torrenting have legitimate uses, however downloading copyrighted material violates the law in many global jurisdictions, including the US.

Certainly, there was a time when the only way to access digital entertainment through a home computer involved ethical decisions for the user and did not have black-and-white answers. However, now that legitimate streaming services are our go-to entertainment choice and with new-release movies going straight to streaming, we need to recognize that the ethical issues involved in downloading movies are no longer a grey area. Ensure that your entertainment viewing complies with the laws in your country and enjoy the risk-free, low-cost options that the spread of online entertainment now offers movie fans.