How To Watch BBC iPlayer In The USA

How To Watch BBC iPlayer In The USA

For those who don’t know, the British Broadcasting Corporation (BBC, for short) is the hottest thing in London. Well, actually, the entire United Kingdom. iPlayer is BBC’s premier streaming service and it’s one of the best things that’s ever happened to British television.

It’s got loads of great titles, such as Vigil, The Keeper, Ambulance, Casualty, Inside Britain’s Kidnap Gangs, and a whole lot more. They even have a few of the hottest Marvel movies streaming as well!

There’s only one issue… It’s only available to viewers in the UK. Unlike Netflix, Hulu, or Amazon Prime, which are all available globally, BBC iPlayer is only available for UK viewers. If you try to create an account or log in to BBC iPlayer from anywhere outside of the UK, you’ll be met with a friendly message that states, “BBC iPlayer only works in the UK. Sorry, it’s due to rights issues.”

Well, one would think anyways. That is unless you have a VPN!

In today’s post, we’re going to go over exactly how to use a VPN to watch BBC iPlayer in the USA or wherever else you happen to be in the world. Let’s take a look, shall we?

What’s So Special About BBC iPlayer?

Alright, so perhaps you’re a doubter. Maybe you’re thinking to yourself, “I should just stick with my Netflix subscription and forget about the whole BBC thing…”

Woah there just a minute. Although it may be tempting to sleep on iPlayer due to its accessibility issues, we have to say that it’s definitely worth a try. Once you spend a Saturday evening glued to “the tele” watching sultry British detectives and medics do what they do best, we guarantee you’ll have a different idea on the matter.

Not that it’s all reality television, either. Although there are lots of those, there’s also a fair amount of documentaries, docu-series, full films, crime dramas, and lots more. Needless to say, it’s enough to keep you and the whole family occupied for the rest of the calendar year.

How To Watch BBC iPlayer Titles In The USA: Step-by-Step

Alright, so let’s just go ahead and say that you’re sold on iPlayer (or at least willing to give BBC a chance). What’s a lad supposed to do next?

Well, you’re in luck, because we’ve put together a step-by-step guide detailing everything that you need to do to watch BBC iPlayer titles in the USA, India, Germany, Switzerland, or wherever your travels take you!

1. Download A High-Speed VPN: First things first, you’ll need a high-quality, high-speed VPN. Virtual Private Networks are basically networks of computer servers spread throughout the globe. By signing up for a VPN service, you’ll be able to route your data and internet traffic through one of the VPN’s servers anywhere throughout the globe.

What does that mean in layman’s terms? Well, it means that you’ll be able to trick other websites, apps, and online platforms into thinking that you’re visiting from another country. Essentially, you could be in the United States, use a British VPN server, and a platform like BBC iPlayer would think that you’re located in the UK.

When it comes to streaming, you’ll want to have a high-speed VPN. Personally, we recommend NordVPN or ExpressVPN if you’re going to be streaming full-on tv shows and movies.

2. Select A VPN Server In The UK: Once you’ve downloaded your VPN, you’ll need to select a server somewhere in the UK. Most quality VPNs will have a number of different servers around the globe, allowing you to access the internet from virtually anywhere.

For the purpose of watching BBC iPlayer, though, you’ll want to select a server in the UK. In this case, the VPN we’re using has multiple servers throughout the UK. Any one of them will do! 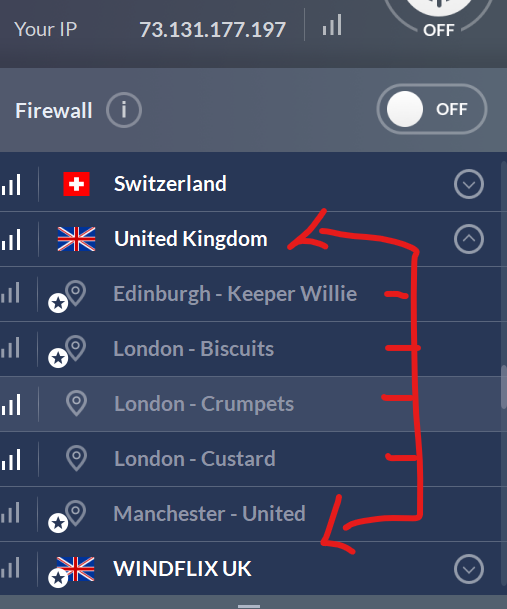 3. Create A BBC iPlayer Account: After selecting your UK-based VPN server, give your device a couple of minutes to finish connecting. Your VPN’s user interface should notify you as soon as your IP address has changed and your device is registering as if it’s coming from the country you selected.

Now that you’re fully connected to the UK server, it’s time to head on over to https://www.bbc.co.uk/iplayer/most-popular and create an account! Since you’re registering your account “from the UK,” you’ll have no problems creating your account and subscribing to their service. You’ll even be able to register with a U.S.-based credit or debit card!

4. Put Some Popcorn In The Microwave: Once you verify your email address, you’ll be set and ready to go! As long as your VPN is connected to a British VPN server, you’ll be able to log in to your iPlayer account any time you want and watch whatever show you want. If your VPN suddenly crashes or you forget to turn it on, though, you’ll still get the standard message informing you that titles are only available to UK visitors.

Why Do You Need A VPN To Watch iPlayer In The U.S.?

The reason why BBC iPlayer geo-restricts its titles is due to licensing and copyright. You see, they make a lot of their own shows and have their own tv/film studios. All of the producers, actors, and directors want to make sure that their money stays in-house and isn’t cheaply sold off to other streaming services.

There’s a complex bureaucracy behind licensing and media rights, which we won’t go into here. But just know that it’s all just a bunch of paperwork that nobody has any real control over.

Aside from that, follow the same steps listed above. If you already have an iPlayer account that you created on your computer, then you can log directly into it using your phone, providing that you’re using a UK-based VPN server on your phone.

Whether you’ve been considering signing up for iPlayer or you already have shows in mind that you want to watch, you’re going to need a quality VPN if you want to watch BBC iPlayer outside of the UK. Thankfully, it’s simple and easy to set up a VPN and you’ll be able to watch as much iPlayer as you want, providing that your VPN allows for unlimited data streaming!