How To Spot Fake Grindr Profiles

How To Spot Fake Grindr Profiles 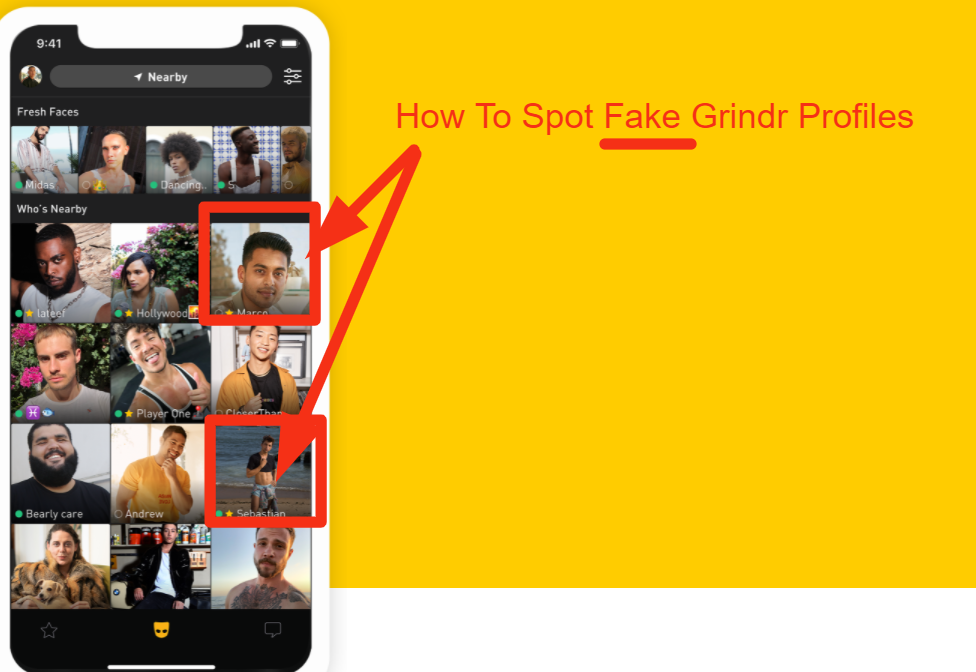 Updated on Jun 1, 2022. Grindr has been around since 2009, making it one of the oldest established dating apps on the internet. One interesting fact that most people don’t know is that Grindr is actually older than Tinder. The thing that makes Grindr different from other online dating platforms is that it’s specifically focused on the LBGTQ community, providing a platform based on equality for all.

Despite Grindr’s specialized focus, it has just as many catfish profiles as straight-oriented dating platforms like Tinder, eHarmony, Match, OK Cupid, and others. If you’ve spent any amount of time on Grindr, then there’s probably a good chance that you’ve already had the unpleasant experience of being catfished. If not, then count yourself lucky!

Whether you’ve previously been catfished or not, though, it never hurts to know how to spot fake Grindr profiles, which is exactly what we’ll be discussing today. Below, we’ll explain some of the groups and individuals who are most likely to be catfishes and their motives for doing so. Then, we’ll give you a detailed guide on how to spot fake Grindr profiles, so you don’t end up being their next victim. Here’s what you need to know.

There are a number of different reasons why somebody might create a fake or “fishy” Grindr profile. Of course, there’s the obvious reason which you’ve probably seen more than a few times on MTVs hit show Catfish. These individuals are usually people who have low self-esteem and would rather trick others into meeting up for a date than they would reveal who they really are.

Most of these individuals aren’t exactly malicious; they’re just dishonest. However, there are also a number of other fake Grindr profiles that are created with more malicious goals in mind, such as stealing your information, bullying/exploiting you, or trying to involve you in an online scam.

Some of these catfishes have their GPS location turned off and use VPN services to mask their IP address and make it seem like they’re located somewhere that they’re not. While VPNs like NordVPN and ExpressVPN are most often used for internet security purposes, some individuals use VPNs to mask their identity in order to scam you or take advantage of you.

You may be surprised to know, but hackers and data thieves love online dating sites because they provide the perfect excuse to learn personal and private details about people without them questioning it. After all, people are on Grindr to find dates, have conversations, and socialize.

All of this means that people who use online dating apps are far more likely to accidentally reveal personal details without giving a second thought to it. Hackers can then take these details and use them to guess your private passwords, triangulate your location, and even steal your identity.

Cyberbullying on Grindr isn’t quite as common in the US as it is in other countries, but it’s still a major issue. Homosexuality is still considered illegal in a number of countries. In some countries, it’s an offense that can get you imprisoned, punished, or even killed.

Scammers are everywhere these days and Grindr is no exception. There are plenty of fake accounts that may attempt to get money, information, or private details by using Grindr. Some scammers even go so far as to initiate seemingly meaningful online relationships to establish trust before using your trust against you and scamming you.

Any business can apply to advertise on Grindr’s platform through Grindr’s official website. However, there are also lower-quality or scammy businesses that create a Grindr profile for the sole purpose of advertising. Most of these advertisers aren’t malicious, but if you match with one of them, they might end up sending you a bunch of SPAM messages.

How To Spot Fake Grindr Profiles…

1. The User’s Pictures Don’t Match Up: One of the easiest ways to spot a fake Grindr profile is if their profile pictures don’t match up. Often, catfishes or scammers will post several random photos that aren’t even photos of the same person! Swipe through all of the user’s pictures and see if you notice any differences between them (e.g., one photo features a tattoo and there are no tats in the next one).

2. The User Has Little To No Information In Their Bio: If you see a Grindr profile that doesn’t have much (or any) information in the bio, then it should automatically raise a red flag. Sure, the user could just be being cautious or trying to maintain their anonymity… or they could be a scammer who didn’t bother writing a bio. The point being, if there is no bio at all, make sure you do a bit of digging and ask them some personal questions.

3. Cross-Reference Profile Pics With Google Image Results: If you suspect that a profile is fake, then there’s a fairly easy way to check. Copy and past one (or all) of their photos into the Google Images search bar. This will initiate a cross-reference check and will show you if the picture came from anywhere else on the internet.

If you see a bunch of results for the same picture show up under social media profiles with different names, then there’s a good chance that you’re dealing with a fake Grindr profile who stole pictures from the internet.

4. Excessive Spelling Errors: Whenever it comes to instant messaging and online dating, there are bound to be a few spelling and grammar errors here and there. Sometimes, people even intentionally misspell words to be cute or funny.

However, if you notice that the person you’re talking to has consistently bad grammar, doesn’t answer questions directly, or just seems like they have no real knowledge of your language, then there’s a chance you could be talking to a bot or somebody from another country who’s trying to scam you.

5. User Asks You For Money: If any Grindr user asks you for money before you even have a chance to meet them in person, then there’s a good chance you’re being scammed. Scammers often take to dating apps to develop a relationship with others and make their matches feel sympathetic to them. Then, the scammer will feed you a fake sob story and ask you to send them money over the internet.

In reality, the scammer is probably talking to hundreds of other Grindr users and asking them all for a small “donation.” Clever scammers with high levels of emotional intelligence can often make hundreds or even thousands of dollars per week by tricking online daters into sending them small increments of $5 or $10 at a time. 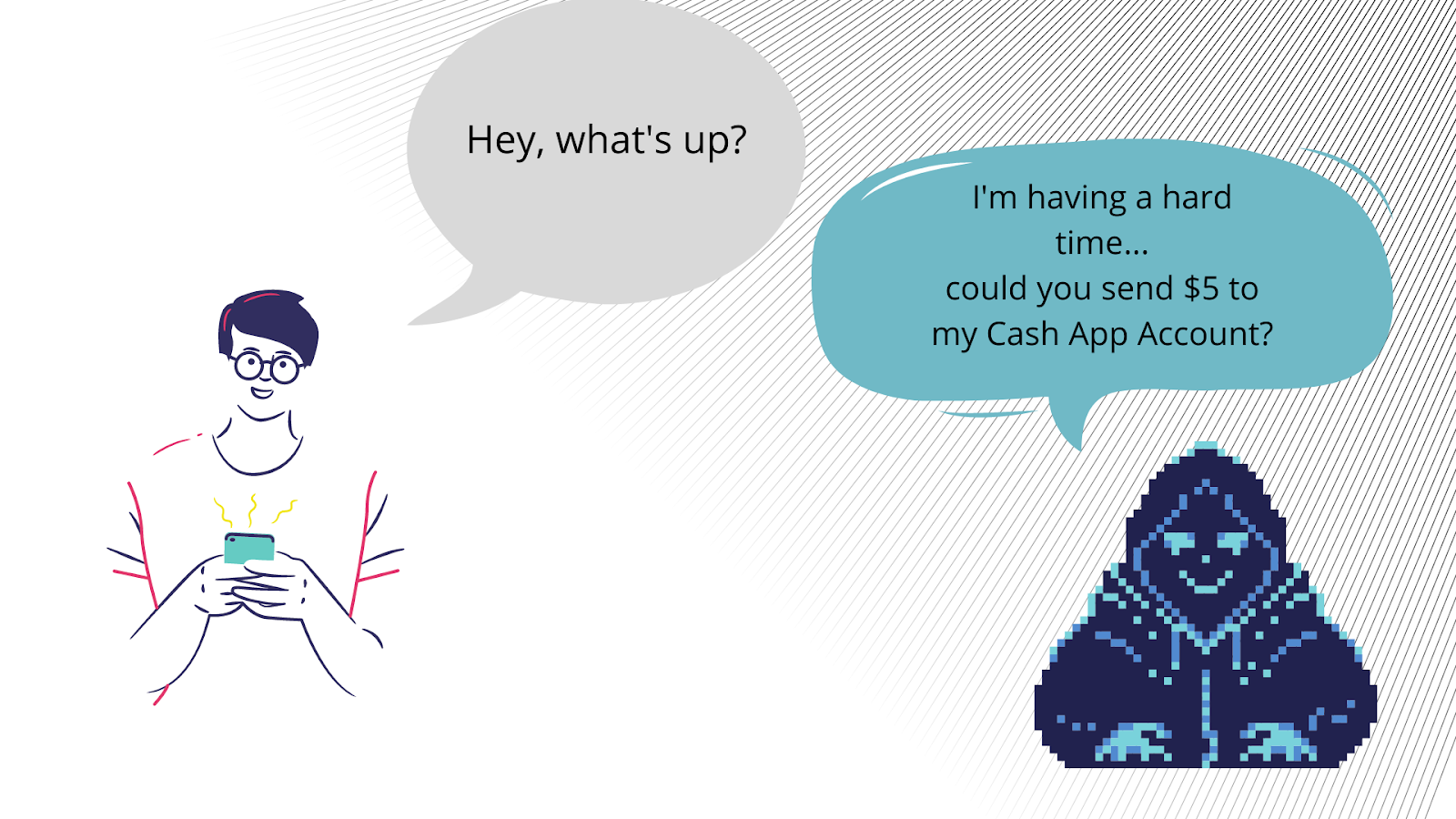 6. They Don’t Want To Video Chat: If you’ve watched Catfish before, then you’re probably well aware of this major red flag. If you’ve been texting with a Grindr user for an extended period of time and they’re still unwilling to video chat with you, then this is usually a strong warning sign that they’re trying to scam you or catfish you.

For the most part, Grindr is a great app and is the only platform that’s actively targeted the LGBTQ community to give them an opportunity to date, network, socialize, or just hook up for the night. As long as you’re aware of the possible dangers, scammers, and catfishes, then you’ll know what to look for in a Grindr profile.

If you’re ever unsure of whether or not a profile is fake or not, then your best bet is to just trust your intuition. If you’re seeing major red flags, then there’s a good chance that you’re right.

We hope that this short guide has been helpful and we wish you the best of luck going forward with your online dating!