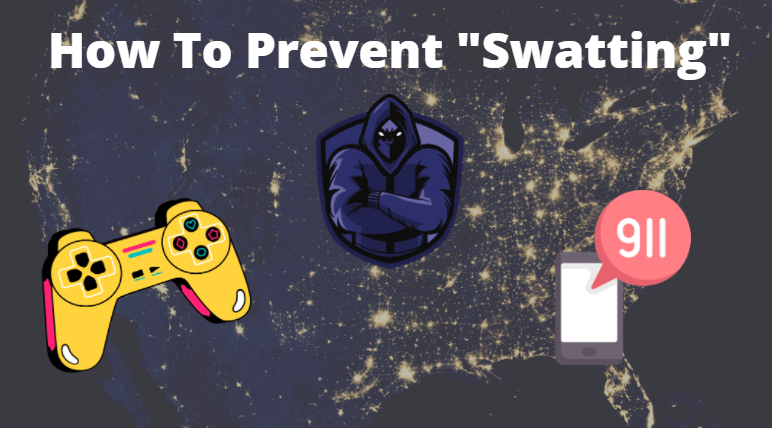 Have you ever had somebody accidentally call 911 to your home? Perhaps it was your kid, or maybe you accidentally dialed 911 while your phone was in your pocket. Either way, we’re sure you were incredibly surprised when police officers or firefighters showed up at your front door asking you what the problem was!

What if somebody was maliciously calling emergency response officials to your home address, though? Although most people would agree that it would be crossing a line, there are some individuals who think that it makes for a great prank. In some cases, it can get people hurt or even put in jail.

Welcome to the wonderful world of “swatting.”

Swatting is when other people call emergency authorities or 911 and get them to come to your house. They’re usually able to do this by obtaining your public IP address while you’re gaming or chatting online. This is why it’s so important to encrypt your data and mask your IP address by using a VPN like the ones we’ve reviewed.

In today’s post, we’ll explain why swatting is a thing, show you some of the real-world ramifications it can have, and more importantly – how to prevent swatting. So, now that we’ve got your attention, let’s jump in!

What Is The Point Of Swatting?

The point of swatting is almost purely malicious. In a best-case scenario, it’s done as a “prank” between online friends. The idea is to startle the person on the other end when the authorities suddenly knock on their door. For many people, seeing firefighters, police, or EMS at their front door is enough to give them a heart attack.

Some people just have a sick idea of “fun.”

However, swatting isn’t always this innocent (if you can even call it that, in the first place). Take the following story, for instance.

An individual was targeted by a Ukrainian hacker known as “Fly.” The hacker targeted cybersecurity journalist Brian Krebs by sending him a postcard and an envelope containing pure heroin. Just moments later, “Fly” swatted Krebs by calling the police to his home.

As you can imagine, the police found the heroine, and Krebs was in some seriously hot water. Thankfully, Krebs was able to explain the situation and “Fly” was eventually tracked down and arrested. However, this story could have gone a lot worse in different situations. There have also been many stories of rival drug dealers swatting each other to remove the competition.

Who Are The Perpetrators?

Swatters could be anybody. In many cases, they’re just random online gamers who get mad after you kill them one too many times in Call of Duty. In some cases, they’re hackers who are maliciously targeting you or even rivals who want to see you unjustly locked up.

It’s worth noting that the swatting is very illegal and can get the perpetrator serious jail time, depending on the situation. So, if the thought crosses your mind, this is our disclaimer – don’t do it!

Swatting: It’s Not Just A Prank

As you’ve seen thus far, swatting can be pretty traumatic and even damaging to the victims who get swatted. However, swatting has far deeper ramifications if you really think about it.

In most major cities, local police forces, firefighters, and EMS workers are already overworked and spread thin. When they have to waste time following up on “emergencies” fabricated by swatters, their resources are spread even thinner.

So, as you can see, swatting is not a prank, and people who engage in swatting are quite literally putting innocent lives at risk.

What Happens If You’ve Been Swatted?

If you’ve been swatted, any number of things can happen, depending on what your swatter told the 911 dispatcher. Maybe they said there was a fire at your house and dispatched a fire team, or perhaps they claimed there were drugs in your home and a K9 team shows up at your house to flip your furniture and search for drugs.

When the emergency officials show up and find out nothing is wrong, they’ll usually start by blaming you. You could be arrested, ticketed, or fined until you have the evidence you need to prove that it wasn’t you who made the call. Often, you may need to work with a lawyer to gather the necessary evidence and make your case in court.

How To Prevent Swatting

As scary as swatting sounds, there are some relatively simple and easy ways that you can prevent swatting. By maintaining your online anonymity and limiting the information you share online, you’ll take the target off of your back and make it harder for individuals to swat you. H

1. Use A VPN While Your Gaming Or Chatting Online: The best defense against swatting is to use a VPN (virtual private network) service while you’re interacting with others online. When your device is connected to a VPN server, your internet traffic will be encrypted and routed through a secure, external server, so no snoopers can see any sensitive data that you send or receive.

Additionally, using a VPN will mask your IP address (which is naturally associated with your physical location). Once you’re connected to a VPN, you’ll be able to mask your IP address and make it appear as if you’re located in another country or at least another region of your own country.

This prevents would-be swatters from being able to use your IP address (which is often publicly displayed while playing certain online games or using certain chat platforms) to find you. If you’ve never used a VPN before, then we suggest checking out our review of NordVPN and ZenMate, both of which are highly rated and have super simple interfaces.

2. Never Give Away Personal Address Details Online: Using a VPN won’t do much if the swatters can visit your profile page and view your address or your neighborhood. To prevent this, we recommend limiting all of the information you share online. Avoid sharing details, such as the neighborhood you live in, pictures of your street or house, or even the school you attend.

3. Don’t Harass Or Bother Other People Online: As the saying goes, “Don’t poke the sleeping bear.” When you’re online, you never really know who you’re dealing with. Before you start insulting that other player online, remember that they could be a hacker or somebody with a bad temper who would swat you without a second thought.

Try to be polite whenever possible. If you can’t be polite, then avoid communication altogether.

Swatting can result in serious consequences for the person who’s been swatted and can also put lives in jeopardy by taking valuable emergency resources away from legitimate causes. The best way to prevent swatting is to use VPN to mask your location while you’re interacting with others online. When you combine a good VPN with cybersecurity hygiene (limiting data you share online), then you should be relatively safe from swatters trying to target you.