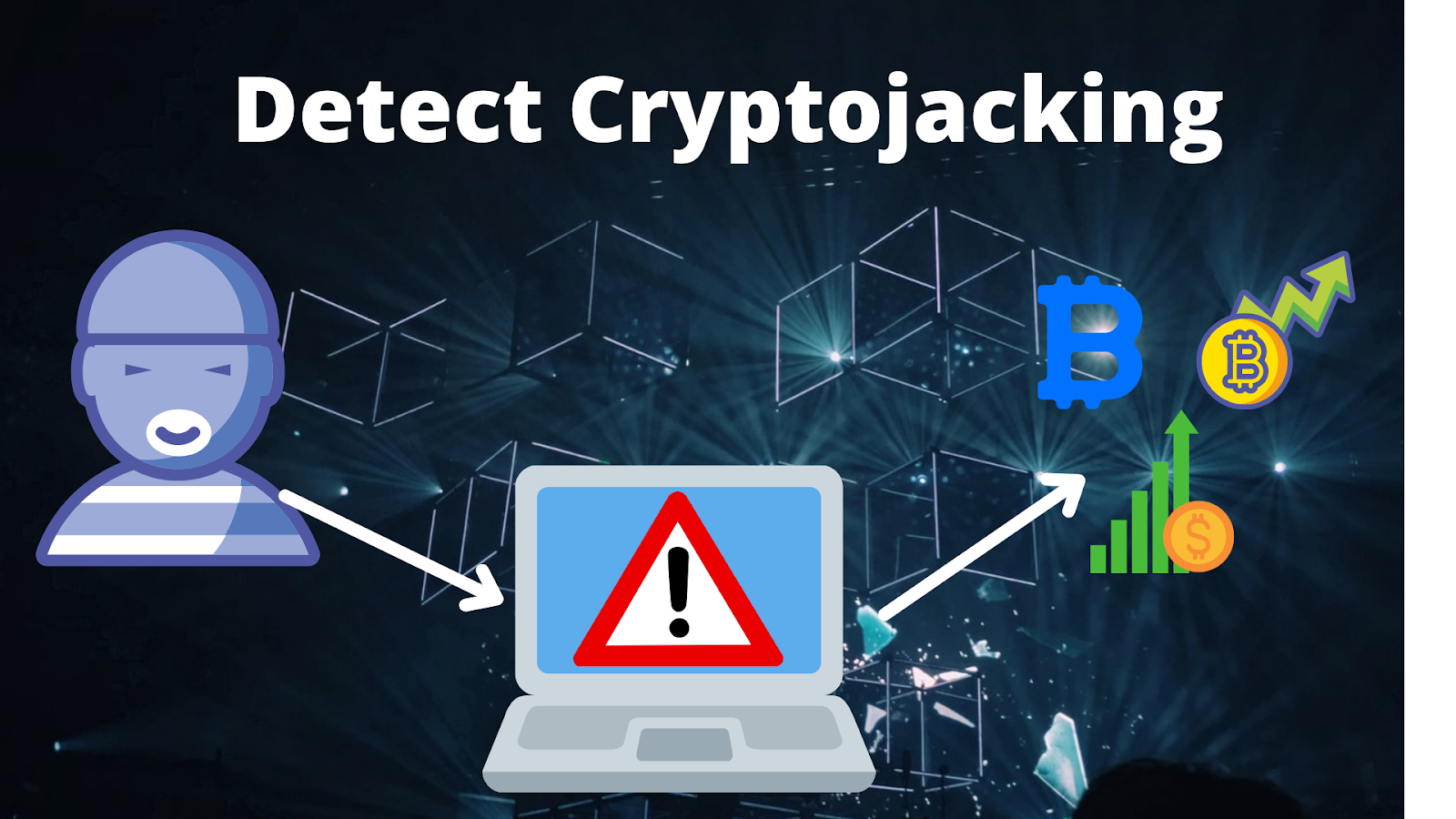 In the old days, crime was a lot simpler. Generally speaking, you could easily identify the criminals around you. They acted shadily, spent too much time looking at the things they wanted to steal, and might even have developed a criminal record or bad reputation that would serve as a warning for law-abiding citizens to keep their distance.

Today, however, crime is nothing like it used to be, especially in regards to cybercrime. Through the internet, hackers and cybercriminals can target anybody in the world. Targets who don’t have a secure device, practice safe browsing, or use their device on unsecured networks without a VPN to encrypt their traffic tend to be the easiest prey.

Now, hackers are focusing on stealing cryptocurrency, as it’s difficult to track, uses anonymous blockchain transactions, and can be used in virtually any country in the world. One of the most common tactics they use to illegally get crypto is through a method called “cryptojacking.”

In today’s post, we’ll explain what cryptojacking is, how dangerous it is, and how to know if you’re a victim. Then, we’ll show you how to scan for and remove any cryptojacking malware that may have been embedded on your computer.

It’s time to take your computer back!

So, let’s start with the basics… If you’re new to the whole concept, then you’re probably wondering what cryptojacking is, in the first place. Just based on the name, it sounds like it has something to do with stealing cryptocurrency. However, you can be a victim of cryptojacking without ever having purchased or used cryptocurrency before!

First, understand that all cryptocurrencies must be “mined” by computers. Cryptocurrencies like Bitcoin and Ethereum have a limited supply of coins (similar to natural resources like gold), which must be extracted by computers that solve increasingly complex algorithms to be rewarded with coins.

The lower the supply gets, the more processing power is required to successfully mine tokens. In the early days of Bitcoin, you could mine several Bitcoins per day using an old-school Pentium chip. Today, Bitcoin-mining computers use top-of-the-line processors, water coolers, and insane amounts of memory.

So, back to cryptojacking… what exactly is it?

In a nutshell, cryptojacking is when hackers use your device without your knowledge to mine cryptocurrency for themselves. They’re able to do this by infecting your computer with malware.

Then, they use this malware to control your computer and run crypto-mining programs in the background. Whenever your computer earns crypto, though, you don’t reap the benefits; the mined coins are sent straight to an anonymous crypto wallet owned by the hackers.

Compared to other forms of malware, cryptojacking isn’t quite as dangerous. Most malware programs are designed to steal your personal data (such as social security numbers, account login credentials, etc.) stored on your computer.

Cryptojacking programs, on the other hand, are designed to operate secretly in the background of your computer. They use your computer’s processing power to mine for cryptocurrency with the goal of remaining undetected for as long as possible.

That being said, cryptojacking has the potential to be very dangerous for two reasons:

For one, if hackers are able to remotely control your device for their illegal mining, then you had better believe that they have access to the rest of your device. Just because they aren’t actively searching for your private data doesn’t mean that they won’t decide to do so one day. 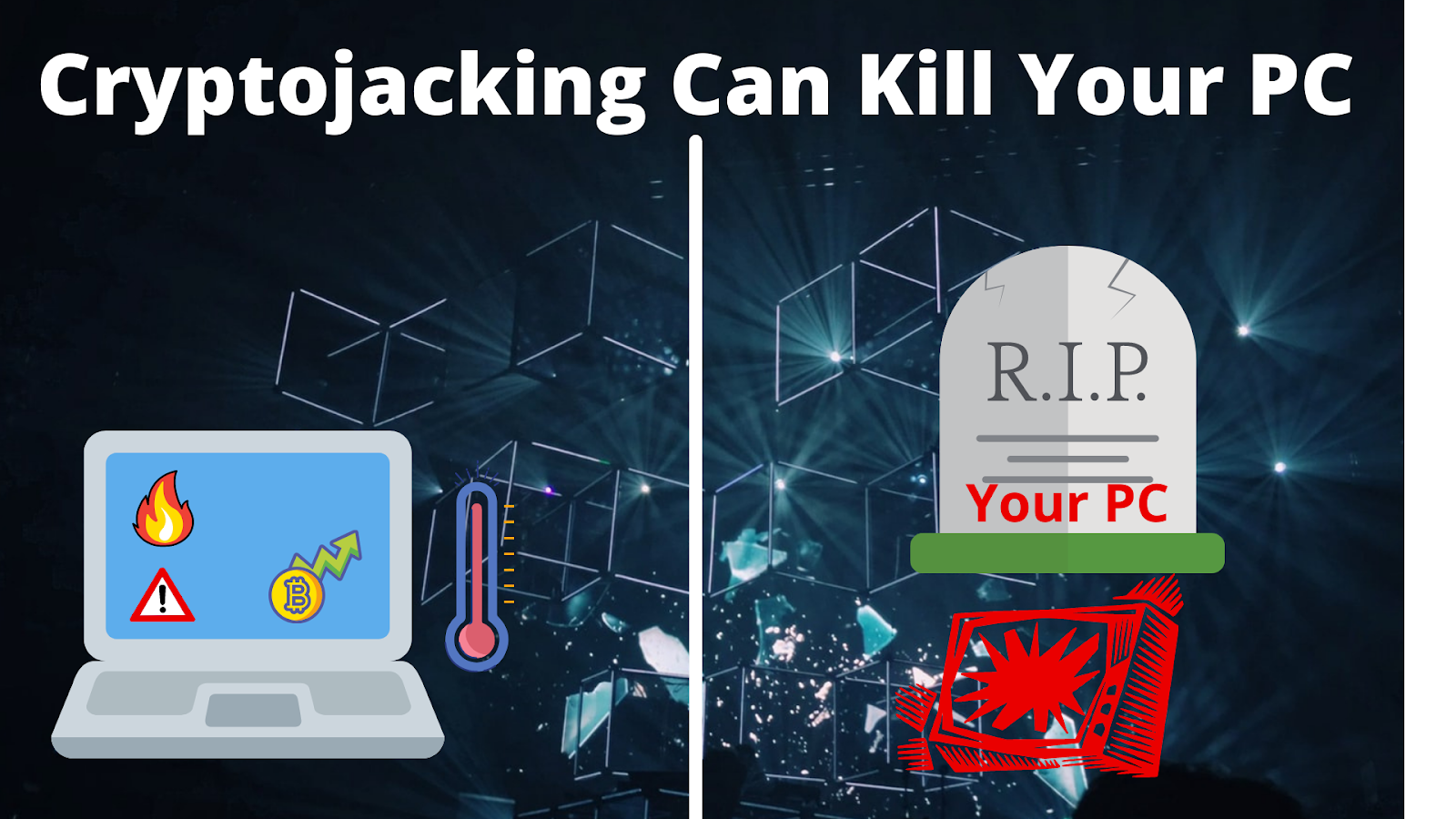 How Are Devices Infected With Cryptojacking Malware?

Hackers can infect your device with cryptojackers by employing several different tactics. Usually, they target users who aren’t as tech-savvy and don’t know enough about computers to tell that their devices are being cryptojacked.

Often, hackers are able to run cryptojacking malware on infected computers for weeks or even months at a time before the computer dies or the user takes action to remove the malware. Here are the most common ways that computers are infected with cryptojacking software.

Phishing scams are just as prevalent today as they were when the internet first came out. They usually come in the form of emails or SMS messages that are designed to get you to visit third-party websites where you’ll either give out your personal information or download viruses on your computer.

Phishing messages are disguised as messages that come from seemingly legitimate sources. They often pose as your cell phone company, your internet provider, your bank, your credit card company, or even your doctor. They’ll send messages asking you to provide “verification” or offering you a “free gift” in exchange for filling out a form.

If you suspect that you’ve been sent a phishing message, the best thing you can do is to not interact with it.

If you’ve been torrenting files and downloading movies, programs, etc., from sites like The Pirate Bay, then there’s a good chance that your computer has already been compromised. While many of the torrent files you find online are legitimate, there are just as many that are infected with viruses and malware designed to give hackers a backdoor entrance into your computer.

The best ways to prevent this are to read the reviews/comments under a torrent to check if there are any comments referencing a virus. We also recommend using top-tier anti-malware software to scan downloaded files and that you use a VPN designed to provide internet privacy while torrenting.

Last but not least, if you’re downloading files from unreputable sites, there’s a good chance that they could come with a virus attached. Some of the top sites people get computer viruses from include:

Realistically, you should avoid downloading any files from sites that aren’t reputable or well known. The best way to protect yourself from sites like these is to use anti-virus software that features a browser extension designed to protect you as you browse the internet. Some VPNs (like Surfshark VPN, for example) feature browser plugins that scan websites for phishing and malware.

So, now that you know a little bit more about what cryptojacking is and how it works, here are some telltale signs that your computer might be infected with cryptojacking malware.

How To Remove Cryptojacking Malware

Cryptojacking is a growing problem that’s come along with the rapid growth of international cryptocurrencies. The good news is that cryptojacking malware is fairly easy to detect due to the extreme strain that it puts on your device.

If you’re experiencing any of the symptoms listed above, then we recommend taking things seriously and doing everything you can to identify and destroy the virus before it does further damage.