How Do Macro Viruses Work?

How Do Macro Viruses Work? 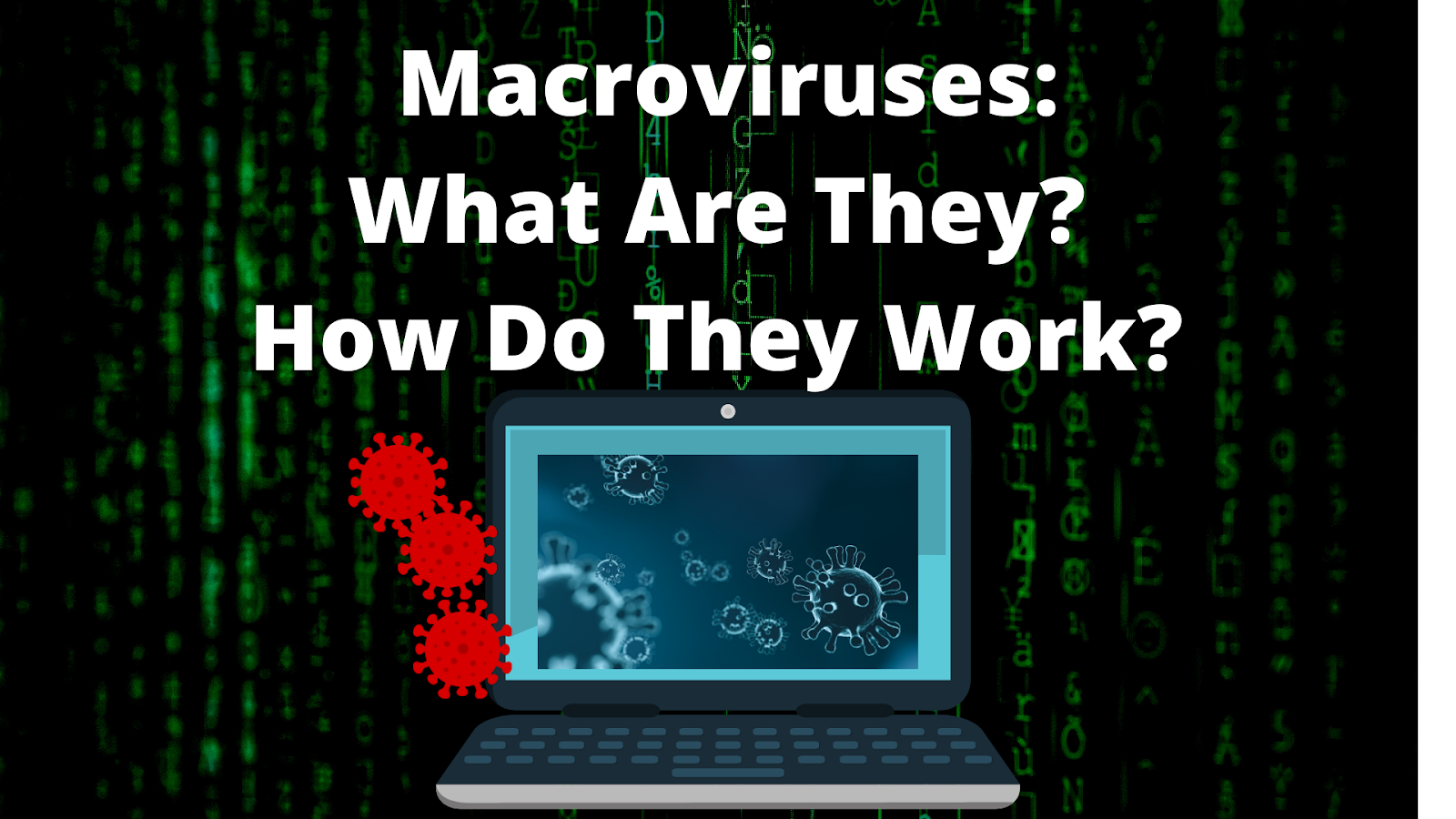 In a world where almost all of our important data (and some would venture to say our entire lives) is stored on our computers, the thought of having a virus take over our devices and corrupt data or render our entire devices inoperable is a nightmare.

When it comes to computer viruses, there are a endless possibilities. There are trojan horses that come onto your computer disguised as legitimate programs, there are pieces of malware that can give hackers control over your device, malware that can allow third parties to see through your webcams, and a whole lot more.

One of the oldest and most established categories of malware are macro viruses. In today’s post, we’re going to take an in-depth look at what macro viruses are and how they work. We’ll also explain where they come from, how they spread, and what you can do to ensure that your device isn’t infected by one.

What Are Macro Viruses?

First, let’s define what a “normal” computer virus is. Essentially, viruses are malware programs that are designed to replicate through multiple files on your device and easily spread to other devices through emails and file sharing.

Unlike traditional malware that only consists of a single program file, viruses are dangerous because of their ability to replicate and spread (similar to a biological virus).

Traditionally, Windows and Linux devices were targeted as these OS platforms allowed for more user accessibnility and thus presented more vulnerabilities. However, there have also been viruses designed to target iOS and Mac OSX operating systems as well.

Macro viruses are different, though. They are designed to be spread through multiple operating systems.

Instead of targeting the operating system directly, they often work by embedding themselves in document files, cross-platform apps, and file types that are accepted by both Windows and Mac OSX.

What Makes Macro Viruses So Dangerous?

Macro viruses are so dangerous because they can operate on so many different platforms. This means that the same virus will be able to target multiple devices in a household, business, or an organization.

In addition to their versatility, macro viruses are also dangerous because they act as trojan horses. They are often downloaded or shared without the user’s knowledge. The user may think that they’re sending a totally legitimate file; in reality, though, the file they’re sending has been corrupted with the virus and will infect the recipients device if opened.

Often, the macro virus will have spread through numerous devices (sometimes an entire company’s infrastructure) before the virus creator decides to activate it. Once activated, all of the devices where the virus has spread to will be vulnerable to penetration and data theft.

To give you a real-world example, it’s like sending hundreds of “sleeper cell” agents into an enemy country and then activating them all at once. The results can be incredibly chaotic, at best. 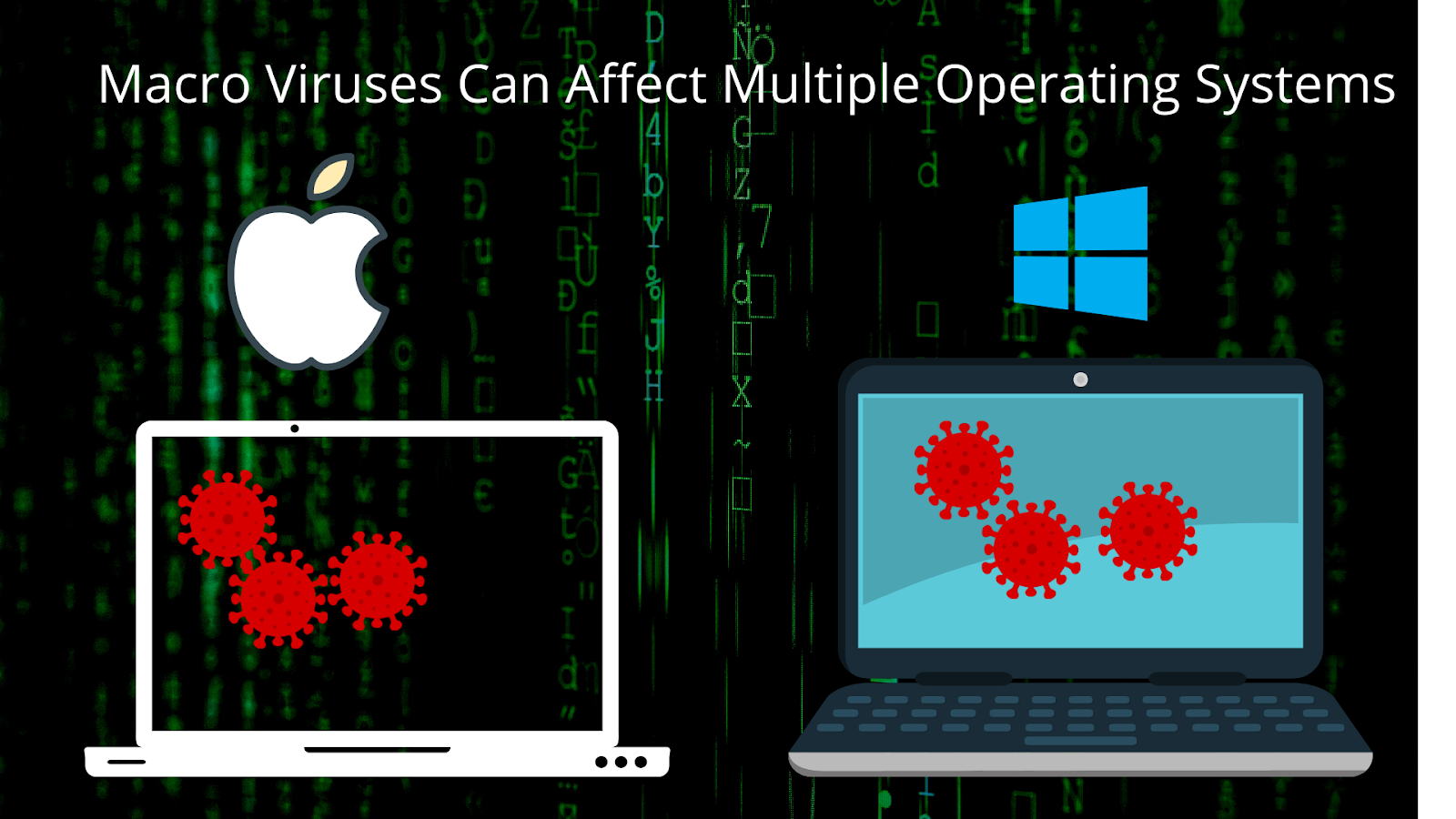 Where Do Macro Viruses Come From?

Macro viruses are created by hackers and comptuer programmers. Once created, they may be sold to scammers and other hacking organizations who then go on to use the macro virus to attack targets of their choice.

Sometimes the targets are random. Hackers just want to use the virus to create a “botnet” that allows them to control multiple computers at once for larger hacking attempts. Other times, the targets are very specific and may be organizations or entire companies that they want to compromise or steal data from.

That being said, here are

So, now that you know where macro viruses originate from, its time to explain how they’re spread. The key to stopping and preventing macro viruses is to know where they come from and what to look out for.

One of the most common places where macro viruses are spread is through phishing emails and messages sent to devices. Phishing messages are those that are sent from seemingly reputable sources. The sender may pose as a bank officer, loan agent, sweepstakes reward, or even your own phone company.

They’ll send an email with a link that’s designed to re-direct you to a fake/scam website. Once you visit this link, you may be required to enter sensitive information into a form or may be asked to download a program that will “help you” with whatever it is you’re doing. In almost all cases, the macro virus will be contained within these files that are downloaded on your device.

Although torrenting isn’t quite as common as it once was, it’s still fairly widespread. Torrenting is peer-to-peer file sharing, where multiple hosts “seed” the file in order to increase download speeds for new hosts. Torrenting is the most common way of sharing pirated software, movies, and other media.

Given the rather grey nature of torrents, they are often used to distribute viruses and other malware throughout the internet to random computer users. Often, the torrent file will be legitimate, and will actually contain real cracked software or a new release movie. This is the “bait” that’s designed to ensure you don’t delete the file as soon as you download it.

Sleeping macro viruses can also be contained within these torrent files. This means that they may not be activated until far later in the future. By the time you realize there’s a hidden virus on your device, it may be too late to do anything about it.

There’s a reason why your operating system gives you a warning message every time you try to download a file from an “untrusted source”; it’s because macro viruses can also be spread through malicious programs that are disguised as legitimate programs. Perhaps the program is a game or maybe it’s even disguised an anti-virus proram (ironic, right?), but the end result is the same.

Let’s just say that you’re at work and a coworker shares a document file or excel spreadsheet to you via your shared network… However, the file has been corrupted by a macro virus without your knowledge. Now, your device has been infected with the virus!

Before you go blaming your coworker, though, it’s almost certainly not their fault. In most cases, it’s because their device had already been infected with a macro virus that simply spread to some of their recently accessed files. It’s similar to how people can be contagious and spread a biological virus days or weeks before they even experience symptoms of their own.

The same scenario that we described above with network file sharing can happen when emails are forwarded. If you send a seemingly innocent file to a coworker, friend, or family member over email, the file may be infected with a virus if it was already present on your device. 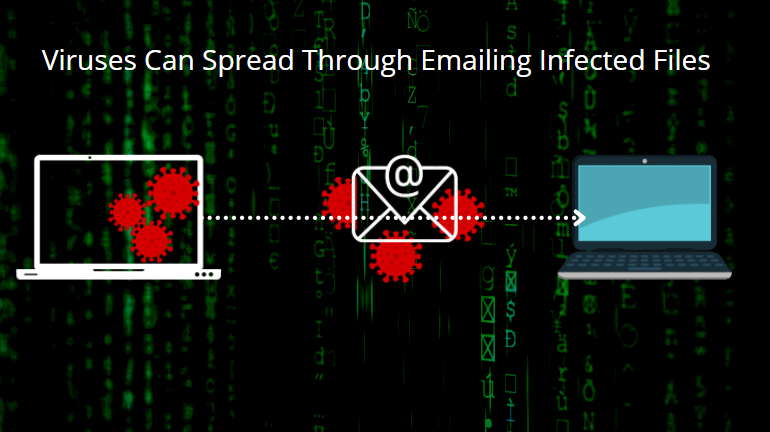 Back before file sharing speeds were so quick, many people used USB memory sticks to distribute copies of files to multiple devices. Some pieces of software still comse stored on USB sticks. While they’re not used as commonly, USB devices can still act as hosts for macro viruses.

If they’re used with an infected device or used to host infected files, any copy of these files sent to other devices will also be infected with the macro virus.

So, now that you have a better understanding of what macro viruses are and how they’re distributed to multiple devices, it’s time to talk about playing defense. Here are the best practices that you can employ to prevent your devicde from getting infected with a macro virus.

Use A VPN To Connect To The Internet

If you regularly connect to public wi-fi networks (i.e., at your local cafe, airport, library, etc.), then you’re incredibly vulnerable to being infected with a virus. Hackers may be on the same network and can directly attack your device and hijack your internet connection, causing viruses to be downloaded on your computer or smartphone without your consent.

To protect yourself against this, you should always use a VPN service to encrypt your online data and hide your IP address location. This will make it virtually impossible for any third-party hackers to hijack your connection or view sensitive data that you’re sharing online.

If you’re looking for a reliable VPN, check out our reviews of NordVPN and CyberGhost VPN! Both have a good reputation, easy-to-use interfaces, and offer affordable pricing models.

If you ever open your email and see strange emails, then there’s a good chance that it could be a phishing email sent from a scammer posing as a reliable source. Remember, if they were a legitimate source, then they would never ask you to enter personal details or download third-party software on your device.

When you see emails like this, your best bet is to ignore them and report them as SPAM to your webmail server. This should limit future emails that you get from them.

Since macro viruses can be spread through USB storage devices, it’s good cybersecurity practice to not allow strangers to plug things into your computer. It’s not just USB sticks you have to watch out for either (this would seem rather obvious).

A hacker may approach you disguised as a normal individual. They may ask if they can plug their phone into your computer so it can “charge” for a few minutes. During the 10 minutes they leave your phone plugged into your computer “charging,” a virus could be distributed throughout your device, and you’ll never see the individual again.

This one should go without saying… don’t download unreputable software, media, or games on your computer or phone. Whenever you’re downloading software programs, try to stick to applcidations that are hosted on your device’s app store or that are offered on reputable sites like CNET.

This is especially important to explain to any children or young adults who may be using your device. We can’t tell you how many parents have given their children access to their computer to play games, only to come back and find out that their kids have unknowingly downloaded multiple virus files on their computer.

As you can see, macro viruses can be quite dangerous and can rapidly spread throughout computer networks and devices. The best things you can do to prevent the spread of macro viruses is to make sure that your internet connection is secure with a VPN, your devices are protected by high-quality anti-virus software, and you never open suspicious messages or download suspicious files.