Face ID Vs. Fingerprint Unlocking | Which Is Safer?

Face ID Vs. Fingerprint Unlocking | Which Is Safer? 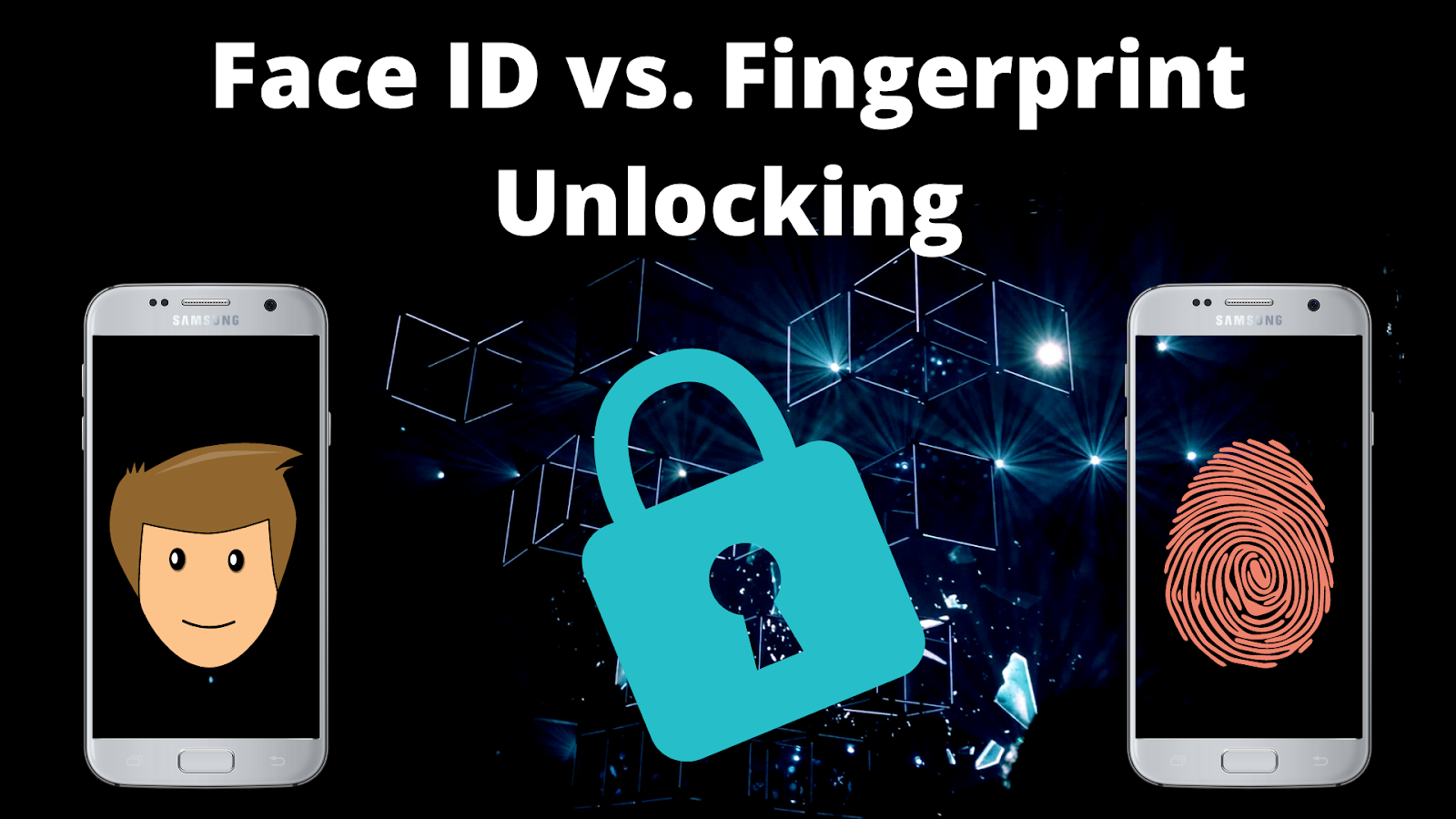 If you have a smartphone, then there’s a good chance that you have at least some type of locking mechanism on it. If nothing else, having a simple “1234” password can keep your phone from opening and “butt dialing” your contacts while it’s in your pocket.

Let’s be honest, though…

Today, your entire life is stored on your phone. Unless you’re one of those skeptics who’s always feared government tracking and has relied on a circulating supply of burner phones, you’ve probably got some pretty sensitive data on your phone, whether you know it or not.

From your phonebook contacts to your home address information, and saved passwords, there’s a lot of things that you might not want to fall into the hands of criminals. Some people just don’t want their nosey family members trying to unlock their phone and scroll through private messages (hey, we all know somebody like that).

The two strongest methods of keeping your smartphone secure are facial recognition and fingerprint unlocking. In today’s post, we’ll take a detailed look at which is the better of the two: Face ID vs. Fingerprints, and explain why it’s so important to keep your phone secure.

Face ID vs. Fingerprint Unlocking | Which Is More Secure?

In August 2016, Samsung released the first commercially available phone with facial recognition software that could be used as a means of locking and unlocking your phone. Shortly thereafter, in 2017, Apple released its iPhone X, which featured a facial recognition program that was slightly better.

Since then, most of the flagship smartphones offered by major phone manufacturers have featured the ability to use facial recognition as a security measure.

Fingerprint scanners have been around for a little bit longer. The first cellphone with a fingerprint scanner was the Pantech GI 100, a top-of-the-line flip phone for its age. Given the fact that fingerprint scanning tech was still in its early stages, it wasn’t practical for other phones of the time.

Alright, enough of the history lesson!

Let’s start by discussing some of the pros and cons of both Face ID unlocking vs fingerprint unlocking.

Facial identification is fairly simple to set up. To initiate it, you need to access your phone’s security/locking settings, where the facial scanner will perform several full scans of your face, each from a different angle. The software scans all of the angles of your face to ensure that it’s as unique as possible (otherwise, anybody with similar features would be able to unlock your phone).

So, here are some of the pros and cons.

One of the best reasons to use facial identification is that it’s natural. All you need to do is take out your phone and look straight at the screen for a second. You don’t have to worry about taking your hand out of your pocket, using your gloves, or worrying about all of the dirt that’s covering your fingerprint.

Another great advantage of facial recognition is that it’s nearly impossible for anybody who isn’t you to open the phone. You’d pretty much need an identical twin for somebody else to unlock your phone (or a really good photo… but more on this later).

The main con of using facial recognition is that it’s not all that hard for somebody to mimic your face and unlock your phone. Although today’s facial recognition technology has improved significantly, there have been tons of reports in the past of people using a photo they found on social media to unlock said person’s phone.

While a photo is no longer good enough to get past facial recognition software, there are other more advanced methods that have been made possible by artificial intelligence and rendering. Today, it’s not hard to use facial rendering software to create a lifelike replica of your face. All it would take is for somebody to use the facial rendering to create a mask and then they could unlock your phone.

Would somebody go that far? Maybe… Ultimately, it really depends on who you are, who’s interested in you, and what secrets your phone has to offer.

Side Note: Face ID And Coronavirus

One thing that’s worth noting is that facial recognition is practically useless if you’re wearing a facemask. This means that you would have to remove your facemask every time you wanted to unlock your phone (providing that you’re somebody who actively wears a mask). 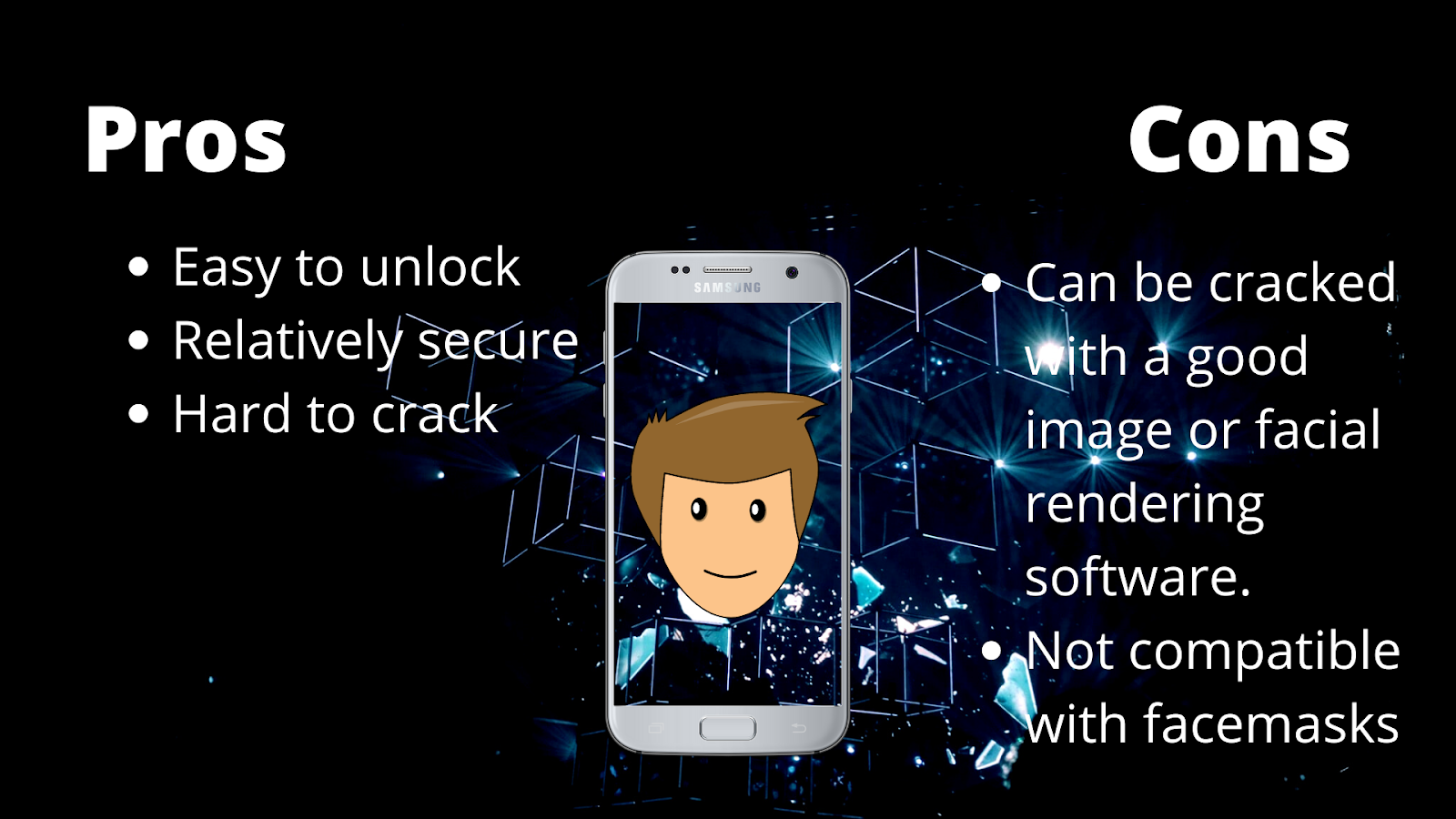 Fingerprinting is relatively simple as well. To set it up, your phone will perform around 10 to 15 separate scans of your fingerprint, getting a full scan of the entire surface of your chosen finger. You can also program multiple fingers, allowing you to easily unlock the phone even when your dominant hand is occupied.

The main pro of using your fingerprint to unlock your phone is that it’s simple and secure. When you pick up your phone or take it out of your pocket, your hand will already be on your phone, allowing you to unlock it as you pick it up.

Also, since you’re the only one with your fingerprint, nobody else will be able to get in (unless they’re using some high-tech fingerprint lifting technology, like you see in heist movies like Oceans 11).

The main con of fingerprint unlocking is there are two points that can become damaged; your phone’s fingerprint reader and your fingerprint itself.

For example, let’s just say that you drop your phone and the bottom half of the screen (where the scanner is located) shatters. Now, you’re locked out of your phone with no way to get in. Then again, the same thing could happen with the front-facing camera that you’d use for facial recognition.

Another more common problem is that your fingerprint may not be scanned properly. This can happen for a variety of different reasons, including:

Also, some phones may not be able to properly read your fingerprint with a protective phone screen cover. This may force you to choose between protecting your phone screen and activating fingerprint scanning. 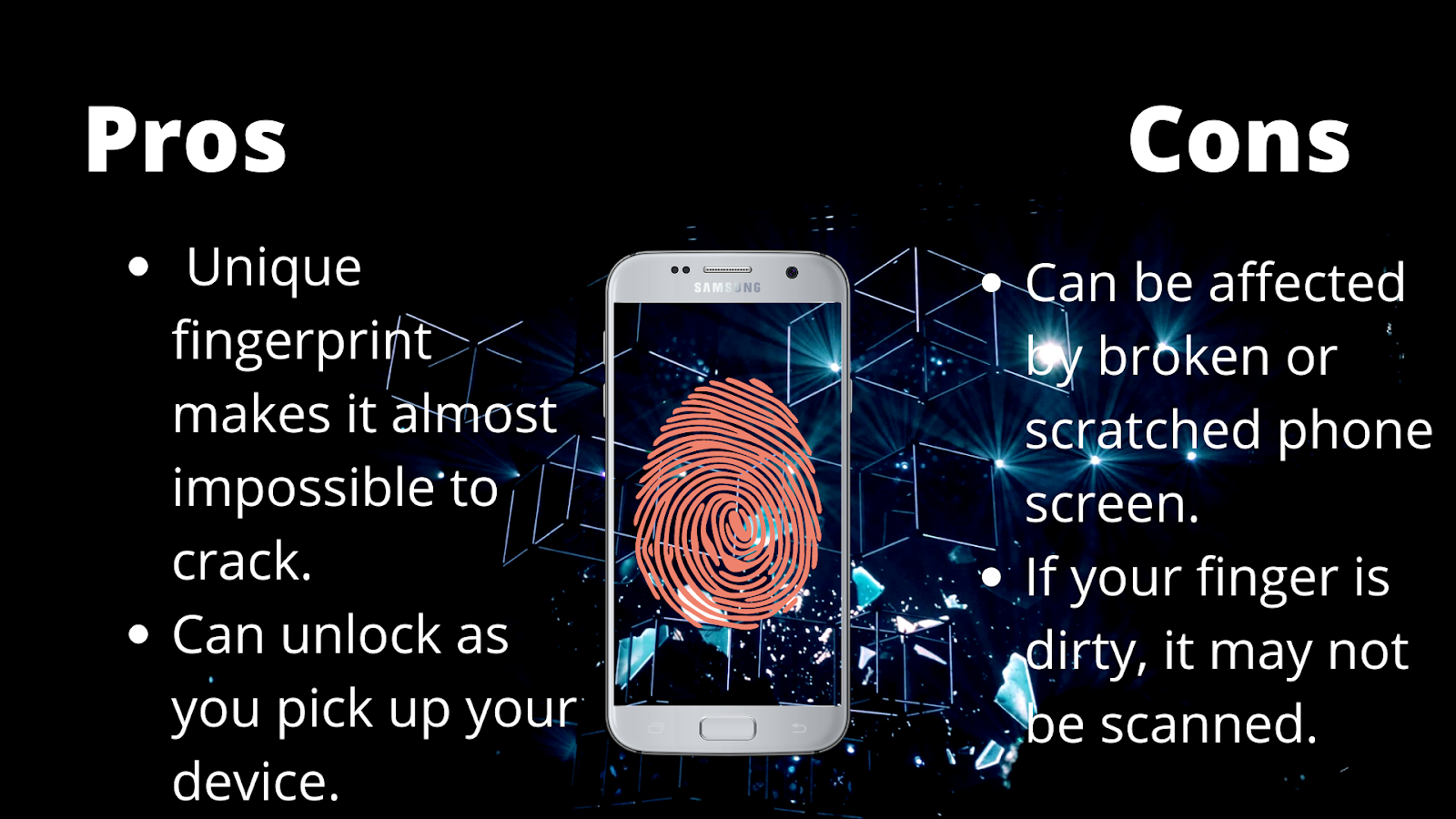 The Verdict: Face ID Vs. Fingerprint

Although both methods of locking your phone are fairly secure, we would have to say that using your fingerprint scanner is a little bit safer. While your face can be mimicked with facial rendering software or an HD photo, it’s a lot harder to mimic your exact fingerprint. This is especially true given the pandemic and the fact that many people are wearing facemasks.

That being said, if you’re not exactly a “high-value target,” and you don’t wear a facemask very often, then using your face ID to unlock your device is generally perfectly safe.

Keep Your Phone’s Data Even Safer With A VPN

Having a secure lock on your phone is the first step you should take to secure your phone and all of the data stored within. However, even facial recognition or fingerprint scanning won’t protect you from hackers and data thieves who are trying to intercept your data while you’re connected to a public network.

Ask yourself, when was the last time that your phone was connected to the wi-fi network at your local cafe, library, or even the airport? If you’re like most people, then it was probably pretty recent. While you’re connected to these private networks, your device is vulnerable to hackers who may try to execute “man-in-the-middle attacks” to steal your confidential data and messages.