Can You Watch Modern Family On Netflix In The U.S.?

Can You Watch Modern Family On Netflix In The U.S.?

During this time, viewers were able to watch as the families grew and evolved in today’s ever-changing, complex, and environment. Whether you’re into comedy, LGBTQ tv, or just want something that’s easy going and simple to watch, Modern Family is guaranteed to make you laugh (and maybe even appreciate your own family a little bit more)!

So, now that we’ve got your attention, you’re probably pulling up your Netflix app right now, hoping to add it to your watch list… Only there’s one problem- It’s not on Netflix anymore!

Although the series was on Netflix for quite some time, it’s no longer available in the United States (on Netflix anyways). So, what’s a fella supposed to do to get their Modern Family fix?

While the show is streaming on a couple of other apps, there’s also a very sneaky, clever way to watch it on Netflix using your existing subscription and a little bit of help from a VPN designed for U.S.-based users.

In today’s post, we’re going to show you everything you need to know about why Netflix geo-restricts certain titles and how to use VPN software to get around these annoying restrictions. All in all, we promise it won’t take you more than a few minutes!

So, first, let’s address the elephant in the room. Why isn’t everybody’s favorite tv show available on Netflix? If it’s as popular as the ratings say, shouldn’t everybody be able to watch it?

Well, at the end of the day, it all comes down to the bureaucracy of licensing and distribution. While the primary goal of every tv series is to entertain viewers, the second-most important goal of a tv show is to make money. Money is made when certain streaming platforms or tv networks submit bids to be the exclusive distributors of the series.

For example, Hulu has some special titles that Netflix doesn’t have; conversely, Netflix has some awesome titles that no other platform has either. It’s all a game to get subscribers to sign up for as many different streaming services as possible. But hey- who pays for cable anymore?

That being said, Modern Family is on Netflix. It’s just not on American Netflix. This is because licensing and distribution agreements vary from one country to another, depending on contracts, deals, and a bunch of other fine print.

Where Can I Watch Modern Family In The U.S.?

If you’re in the U.S., there are currently two places you can watch Modern Family without using a VPN service.

Hulu has been streaming Modern Family for quite some time now. However, you’ll need to sign up for their monthly membership in order to view it. 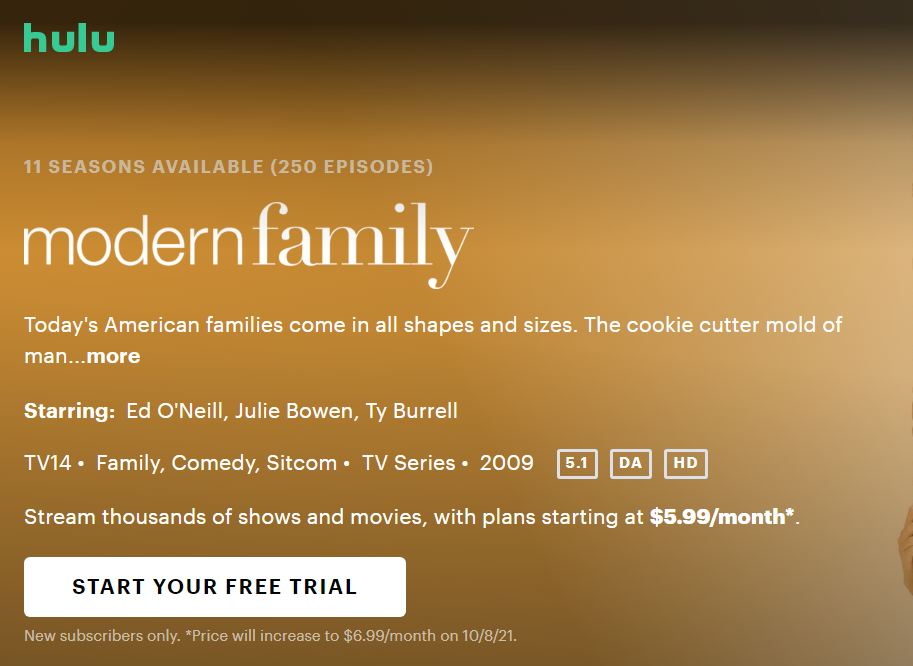 Secondly, you can stream Modern Family on Amazon Prime Video. However, even members won’t be able to watch it for free. You’ll have to pay per episode or buy the entire season if you want to view it.

Which Countries Is Modern Family Streaming On Netflix?

Currently Modern Family is streaming on Netflix in the following countries:

How To Watch Modern Family On Netflix (The Sneaky Way)

So, if you don’t feel like signing up for a whole monthly contract through Hulu, there is another foolproof method you can employ to view Modern Family with your existing Netflix subscription, no matter where you are in the world!

Basically, it involves using a VPN service. A Virtual Private Network service allows you to route your device’s internet traffic through another country or region through a secure, private network. This is commonly used to prevent data tracking and increase users’ online anonymity.

However, it can also be used to access region-specific content, such as movies, tv, music, software, and more! Here’s how it’s done.

Is It Legal To “Spoof” Netflix?

Technically, it’s against Netflix’s terms of service to use a VPN to “spoof” your location and trick them into displaying geo-restricted titles. That being said, it’s almost impossible for them to prove that you did it. If you’re ever accused of spoofing, you can always claim that your password was stolen by a hacker in another country (it happens all of the time).

VPNs will allow you to re-route your internet data so that you’ll have the appearance of accessing Netflix through another country. It’s a great way to view geo-specific titles such as movies and tv series that you aren’t able to access from your home country!