Bluehost vs. HostGator: Battle Of The Web Hosts

Bluehost vs. HostGator: Battle Of The Web Hosts

Updated on Jun 1, 2022. Think of hosting as a sort of retail store. Let’s say that you have a product that you want to put on the market and you want people to buy. The easiest way to accomplish this is to get your product sold in a retail store so that it can be presented to potential customers. The internet is no different.

If you’re thinking of setting up a new website, one of the first things that you’re going to need is a host. In simple terms, the host is the service that connects your website to the internet and allows it to be “hosted” and viewed by other people accessing the internet. Without hosting, sites could only be viewed by the person who created them on their device.

Now, typically, our posts are VPN-related… However, we’ve gotten this particular question so many times in the past few months that we figured it was time to address it.

Bluehost and HostGator are two of the most popular web hosts on the market and they both offer competitive rates, plans, and user interfaces. For those who are new to web design, this can all seem a bit confusing. So, we’re going to make your life easy and give you a simple head-to-head breakdown of both companies.

With that being said, let’s rumble!

A Little-Known Fact About BOTH Hosts…

So, before we even get started, we figured that we’d mention a little-known fact about both hosts. Namely, both Bluehost and HostGator are owned by the SAME PARENT COMPANY! Kind of strange, right? You’d think that both competitors would be owned by very different competing companies; but nope.

Both companies are owned by Endurance International Group (EIG), a major corporation that specialized in the web hosting industry. The reason why prices and options are so similar between the two web hosts is largely due to this fact.

EIG acquired Bluehost first in 2010. They used their investment to help propel Bluehost to be a major competitor of HostGator. Then, once they had accomplished that, they eventually acquired HostGator in 2012, two years later. Since then, both companies have shared a similar platform and resources.

Despite both companies being owned by the same larger umbrella corporation, they are separate companies in their own right. For example, GM owns both Chevrolet and GMC. While both vehicle manufacturers share the same powertrain and trade designs from time to time, they each have their own specific niche that makes them special.

Similarly, many of the VPNs on the market are also owned by the same major corporations. ZenMate, PrivateInternetAccess, and CyberGhost VPN are all owned by a single major corporation based out of the UK, called Kape Technologies PLC.

The same can be said of Bluehost and HostGator. While both are very similar in functionality and features, both are slightly different from one another and each has its own unique spin on marketing.

So, without further ado, let’s get into the showdown between Bluehost and Hostgator. Below, we’ll address some of the most common concerns and questions with each host from pricing to ease of use.

The elephant in the room, as usual, is the cost of hosting. Ultimately, the cheaper hosting is, the more likely customers and web designers are to purchase it. That being said, both hosts have almost identical pricing.

Here’s an overview of HostGator’s plans:

…AND, here’s an overview of Bluehost’s plans: 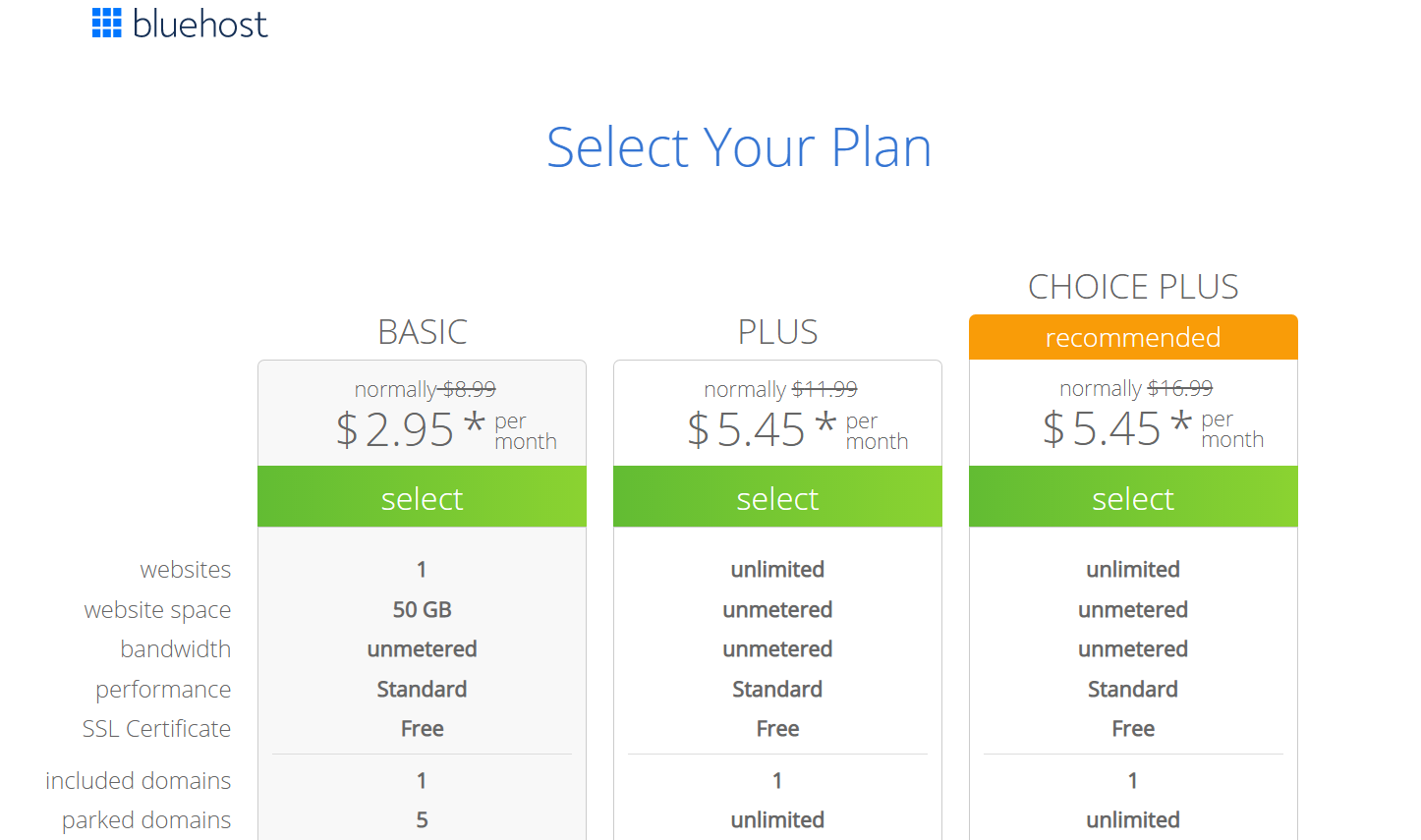 The main difference is that Bluehost has a “Normally costs [way more]” line. However, this is just a marketing ploy to make Bluehost appear to be a higher-end brand than HostGator. In reality, though, Bluehost’s hosting prices rarely ever change, so that “deal” isn’t going anywhere anytime soon.

Keep in mind that these are introductory rates. The longer your site is hosted, the higher the price you’ll pay to renew your domain and keep it listed. Call it unfair if you like, but that’s just the reality of the situation.

In terms of renewal costs, HostGator tends to be incrementally cheaper than Bluehost. While renewal costs change on a case-by-case basis, you might save anywhere from $20 to $50 for a 3-year renewal plan with HostGator over Bluehost.

One of the reasons why HostGator has been in business for so long is its dedication to customer service. Creating a service ticket is beyond easy and it’s always answered promptly and politely. Most of the time, you can even get your questions answered via the site’s instant messenger help line.

Bluehost offers fairly good customer service, but they may take a bit longer to get back to you. This can be a bit frustrating, especially when it’s in regard to your website. Every minute your site is down or experiencing issues with hosting is a minute you’re not making money and losing potential sales.

So if you’re looking for a stellar customer service experience, we recommend HostGator!

In terms of the overall user interface and how easy it is to manage your hosting account, we have to say that both HostGator and Bluehost are tied. The user interface for both hosts is nearly identical and both offer the same options. In fact, you’d be hard-pressed to tell the difference between the two different platforms if you didn’t see the logo at the top of the screen!

If you’re trying to host a WordPress site, then Bluehost is the way to go. They offer advanced plugins and setup options specifically for use with WordPress. HostGator allows for WordPress hosting and offers some minimal plugins, but it doesn’t give you nearly as seamless of an experience as Bluehost in this regard.

Having a fast-loading site is crucial for two reasons:

On average, if your page takes longer than 3 or 4 seconds to load, most users will hit the back button and try another site, so the loading speed is of the essence. Keep in mind that both Bluehost and HostGator have US-based host servers, which means that load times are going to be quick for anybody in the US.

That being said, HostGator does have incrementally faster loading speeds. On average, HostGator can load a site at around 1.3 seconds, while Bluehost can require up to 1.7 seconds to load a site. For most people, a 0.4-second difference is unnoticeable; however, it might be recorded by Google’s “spider,” which can increase or decrease your rank based on loading speed.

Both Bluehost and HostGator offer free SSL security certificates for websites hosted on their servers, so it’s a tie in regards to this. However, Bluehost does feature seamless Cloudflare integration, which helps protect your website from DDoS attacks with a content delivery network. Cloudflare can be set up to work with HostGator, but it takes longer and must be set up manually.

While both Bluehost and HostGator are owned by the same parent company and offer similar hosting plans, we’d have to say that HostGator offers a slightly better deal. Overall, pricing and hosting renewal are a little bit cheaper and the website loading speeds are a bit faster.

So, for most normal websites, we’d recommend HostGator as your first web host.

That being said, if you’re looking to set up a WordPress-based website, then we’d have to say that Bluehost is a better choice. Thanks to their integrated WordPress tools and plugins, it’s far easier to set up a WP site with Bluehost than it is with HostGator.